Ask most singers and they’ll tell you: New Year’s Eve is not their favorite night for a gig.

Audience members are overexcited, demanding and, most often, drunk off their gourds.

“If your goal is to try and re-create the New Year’s Eve scene from When Harry Met Sally, that’s not going to happen,” says jazz cabaret singer Wesla Whitfield, something of a Bay Area legend.

This New Year’s Eve, Whitfield, along with her husband/musical director Mike Greensill, will be performing, as she has many times, at the Empire Plush Room in San Francisco’s York Hotel. But this year’s gig, dubbed somewhat ironically The Best Is Yet to Come, is a little sentimental. Whitfield and Greensill are among the final acts in the Plush Room, whose future is unknown.

“I’m sorry to see it go,” says Whitfield, who, after decades in San Francisco, has moved with her husband, cat and stuffed bears up to St. Helena. “It is such a fabulous room. We have so many memories there. I know everything changes. That’s the one thing you can depend on.”

It was 1979, and Whitfield was slated to headline the room during the first week of January.

The Plush Room, with its gorgeous stained-glass ceiling, had just reopened, having fallen into some disrepair as a mess hall and card room.

Pam Brooks was the New Year’s Eve headliner, but the room’s manager, Gary Menger, suggested that Whitfield give audiences a taste of her upcoming show by doing a short set between Brooks’ sets.

“Gary was a sweet man but not the sharpest pencil in the box,” Whitfield recalls. “He suggested I do this two days before New Year’s Eve, and by then, every pianist on the planet had a gig. I had to play for myself.”

Whitfield, who uses a wheelchair, jokes: “My pedal technique had fallen off by then. There were not lights, no microphone. I wheeled myself to the piano, flailed away and tried to sing. No one paid the slightest bit of attention. I was so relieved.”

Whitfield’s audiences will be pleased to know she’s still singing some of the same songs she sang that night, but back then, “they were an octave higher.”

“I’ve fallen into Kern again,” Whitfield says, referring to composer Jerome Kern. “That first night at the Plush Room I remember getting out my book of Kern music. He was my favorite in the ’70s and early ’80s. Then I put him aside. Last fall I was teaching a class at Napa Valley College, Great American Popular Song, and I learned more about Kern than I had known. My respect for him was renewed.”

Also in the new show’s song list is a tune given to Whitfield and Greensill by Neil Sedaka called “I Found My World in You.”The song also appears on the new Whitfield/Greensill CD, “Message from the Man in the Moon,” the couple’s 18th recording, which, not so coincidentally, will be available for purchase after the show.

The 60-year-old Whitfield notes that in addition to nearly 30 years gone by since her Plush debut, she has passed through a few different hair colors and, she hastens to add, 40 pounds that weren’t there in 1979.

In addition to Kern and Sedaka, Whitfield will be singing her fair share of romantic tunes — we are heading into a new year, after all.

Expect to hear “Isn’t It Romantic,” which Whitfield says is fun to do because “it’s not a plodding ballad. In my mind when I sing, I’m out there waltzing.”

New Year’s Eve at the Plush Room is a pretty civilized affair, according to Whitfield, who should know. “The audience tends not to be so overexcited, like kids off their meds,” she says. “And we’ll sing some songs we haven’t sung in a hundred years.”

Whitfield bristles a little at the notion of doing a sort of “greatest hits” evening.

“People love to hear the same old songs,” she says. “It’s hard to introduce new material. People get upset about it. They want to hear songs they know. I think that’s wrong, myself. I mean, listen, there was a time you didn’t know `New York, New York,’ and the only reason you learned it was by taking a chance and hearing something new.” 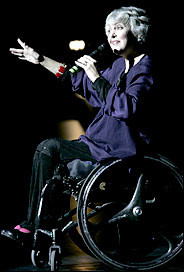 But this final Plush Room gig will be about memories, so Whitfield will sing some of the songs her fans want to hear.

“Everybody coming to the show has their own set of memories, so when we were planning the set list, we decided to wallow in it a little. I want to celebrate the times we’ve had. There’s no other way to get through life.”

Although animated and cheerful in conversation, Whitfield gets really excited at the mention of a project she was involved with earlier this year: a concert production of Stephen Sondheim’s Follies at Notre Dame de Namur University, a production that included students, community folks and pros such as Whitfield.

“Oh, my God!” Whitfield enthuses. “You go from project to project and get a certain sense of satisfaction. Then, every five or six years, you get a project that turns out to be absolutely magical. You come away feeling so renewed. I came away from Follies feeling good about life and thet world and myself — and that’s pretty darn hard.”

Sondheim music is not usually part of Whitfield’s repertoire because, she says, the songs usually need to be heard in the context of the show, surrounded by plot and character. That makes the songs difficult for Whitfield and Greensill to interpret.

But in the show — with only one rehearsal no less — Whitfield, who played aging Follies girl Sally, came alive. “I was born to play Sally!” she says. “Sally is an aging girl. She doesn’t know she’s a woman. She is one but doesn’t act like one, and that’s a good description of me.”

Whitfield got to sing without a microphone, which she hasn’t done in years. “And I hit notes I haven’t hit in public for years,” she says. “I’m proud to have pulled this one off.”

To keep up with Whitfield, visit her Web site at www.weslawhitfield.com.