About four years ago, I was having a chat with Berkeley monologist Josh Kornbluth.

He was touting his latest show, Love & Taxes, but something he said then occurred to me before I talked to him last week.

Kornbluth was discussing how he didn’t want to invade the privacy of his wife and son by creating a show specifically about them.

“But because I have a family, I’ve been thinking about politics, the future and the wider picture. That has forced my gaze outwards and away from my navel,” Kornbluth said.

Sure enough, that outward gazing has pulled Kornbluth squarely into the realm of politics. His new monologue, Citizen Josh opens May 19 at San Francisco’s Magic Theatre.

Even though he keeps threatening to make his next show about playing the oboe, Kornbluth decided he wanted to concentrate on democracy.

“I’m interested in citizenship and democracy,” Kornbluth says from his home. “I’m particularly interested in people who are just becoming citizens and hearing what they think.”

As he has with many of his shows, Kornbluth hit the road to improv. He made the circuit of Bay Area campuses — UC Santa Cruz, UC Davis, UC Berkeley, Stanford, Cal State East Bay and University of San Francisco among others — and started testing material on “audiences not necessarily comfortable with my references and definitely not from my age group,” as Kornbluth, 48, puts it.

As he talked about the frustration of the 2004 election, his feeling of disconnection from the rest of the country, making the world a better place for children and wondering aloud if democracy is even possible in today’s world, Kornbluth found himself learning.

“I was learning not just about the show but about myself and who I am politically, which feels really helpful. What do I believe in? What kind of `-ist’ am I?”

One improv session proved to be particularly insightful. A theater professor at UC Berkeley invited Kornbluth into a History of Theater class, the first of several visits. He had just seen the documentary “Berkeley in the ’60s” and had its visions of politically agitated students protesting and turning over cars dancing in his head.

But what he saw in the classroom was a bunch of young people surfing the wireless Internet on the laptop computers.

“You know if someone is looking at a computer while you’re talking, chances are they’re shopping at the Gap or doing anything but being present,” Kornbluth says. “I really didn’t connect with them at all.”

He was, in his words, “really bummed,” and didn’t relish the idea of returning to the classroom. “I wondered if I was fooling myself that I had connected better with the students at other schools.”

But Kornbluth did go back. He jumped off the stage and started his presentation on the floor. I told them no one was allowed to eat or be on the computer.

“I told them it had seemed like a slap in the face to them to have this guy start talking about the ’60s. `It seemed irrelevant to you. How did you feel about it?’ ”
Then the students started talking.

“The entire class got totally passionate,” Kornbluth recalls. “All these important, profound issues came up. I left there thinking that finding passion is an important part of what democracy allows, what keeps it going, sustains it. As I was leaving the class, a student said, `I’ve never talked about politics like that.’ I realized a lot of what they were talking about, in terms of life and acting, affected me: fear, anger, worry that stuff won’t work out or that no one will agree with me.” 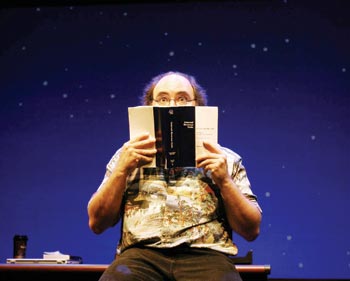 “I have a feeling with this piece that I haven’t had with others,” Kornbluth says. “I’m trying to address a profoundly widespread feeling, a shared community feeling, our communal response to the political traumas of our time. In my own little way I’m trying to respond to it all.”
While gainfully employed as the host of KQED-Channel 9’s “The Josh Kornbluth Show,” a chatty, free-form talk show in the typically Kornbluthian mold, Kornbluth managed to find time to work on Citizen Josh at the Sundance Theater Lab in Utah.

While there, he, a loquacious Berkeley liberal, found common ground with the heavily Mormon, red-state folks he was meeting at the mall.

“He was passionate about that, too,” Kornbluth says. “We agreed that what’s wrong with American politics is that people only talk with people they agree with. Talking to him was exciting and gratifying. In many ways, we were both the `other’ and yet we were so much on the same side.”

Because Kornbluth says he’s still at the beginning of his political education, he doesn’t know quite where to end his show.

“I’ve said this in rehearsal, and I mean it,” Kornbluth says. “I can’t wait to see how this show ends.”

For all things Josh Kornbluth, visit his Web site at www.joshkornbluth.com.