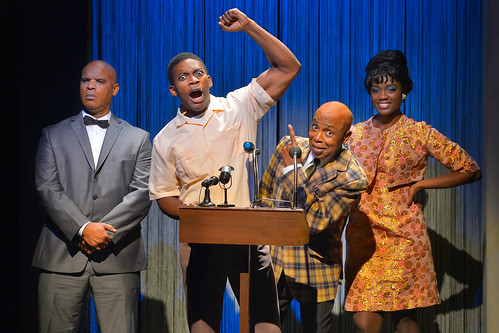 
Playwright (and former San Franciscan) Will Power knows a potent match-up when he sees it. In this corner we have young, preening world heavyweight champion Muhammad Ali who, in the last year of his life, has shed his former identity as Cassisus Clay to become a member of the Nation of Islam with a new name and a new wife. And in this corner we have actor Lincoln Perry, better known as his show business alter ego, Stepin Fetchit, a lazy comic character that became a polarizing force in the realm of African-American stereotypes.

This pairing seems to good to be true, the invention of a clever dramatist, but no. It’s true. Ali and Perry were indeed friends, and their meeting and ensuing relationship is the basis for Power’s intriguing Fetch Clay, Make Man, now having its West Coast premiere at Marin Theatre Company (in a co-production with Maryland’s Round House Theatre).

It seems that Perry had been close friends with boxer Jack Johnson and may know the secret of Johnson’s “anchor punch.” That’s what Ali wants when he summons Perry to Lewiston, Maine in 1965 just days before his rematch with Sonny Liston.

What’s immediately clear is that Power has identified a fascinating moment in the lives of two prominent African-American icons who are known to the world not so much as their true selves but as the characters they presented. For Perry, his fame had crested years before and found himself reviled as an “Uncle Tom” or, as one character spits, “this coon, this lazy, shiftless discredit to our race.” But from Perry’s point of view, his career is a triumph – he made millions from the white-run film industry and was the first black man to receive star billing on screen. He shuffled through the back door, he says, so others, like Ali, could come through the front. 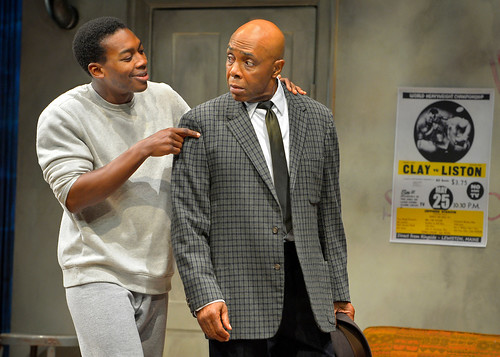 Ali, in his early 20s, is just forming the persona for which he would be known throughout his career. He was spouting poetry, declaiming his beauty and his prowess and, of course, his absolute greatness. Gone was Cassius Clay, and in his place was a clean-living man of God and example for all black men. That was the image, but the reality was more complicated. Ali’s new wife, Sonji, had converted to Islam, but as we see in the play, that choice proved to be short lived. Ali’s place in the brotherhood is also fraught because he doesn’t spread the word of the Messenger as much as he spreads the word of himself. And the assassination of Ali’s one-time friend Malcolm X has cast a threat of danger and retaliation over Ali’s camp.

That’s a lot of history and a lot of drama to pack into a two-plus-hour play, and it seems Power could distill his story down even further. Director Derrick Sanders helps set the historical context through projections (by Caite Hevner Kemp), and a sense of momentum that builds steadily until it diffuses in Act 2.

With consistently strong performances, Fetch Clay has a sense of power from beginning to end, but the excellence of the actors – especially Eddie Ray Jackson as Ali and Roscoe Orman (better known for his decades as Gordon on “Sesame Street”) as Stepin Fetchit – obscures the problem at the center of the play. We don’t know whose story this is. Presumably the protagonist is Stepin Fetchit. We see flashbacks to his early Hollywood days dealing with a studio mogul (played by Robert Sicular) and have a strong sense of what he has to gain by associating with Ali: a second chance at a career that will take him past the shame of his landmark character.

But Ali is such a powerful force in the story that it could also be his, especially as we see him dealing with a rupture in his young marriage as his wife (beautifully played by Katherine Renee Turner) asserts her independence. Ali’s tussle with the Nation of Islam is represented in the character of Brother Rashid (played with barely concealed rage by Jefferson A. Russell), and it’s a relationship fraught with tension and duplicity.

The whole play, in fact, is filled with tension, and it all but disappears toward the end of Act 2 when something mystical happens, and rather than focusing on Orman’s powerful presence center stage, director Sanders lets the slide show go crazy and overshadow his lead actor. Then the play’s ending sort of trickles away, and I found myself left wondering what I wanted to take away from the play. Other than the knowledge of a curious friendship between Muhammad Ali and Stepin Fetchit and some excellent work by actors, I have to admit I remain not at all sure.