One of the best things about the year-end exercise to round up favorite theatergoing memories of the preceding year is that it can be such a powerful reminder of how much good theater we have in the Bay Area and how many really extraordinary theater artists we have working here. Another element jumps out at me this year and that is how, in addition to great homegrown work, our area also attracts some of the best theater artists from around the world to come and share their work (at the behest of savvy local producers, of course).

So here are some thoughts on memorable work I saw this year – and I will add as a caveat, I didn’t see as much as I should have (or as much as I used to for that matter), and I must express some pride that as we head into 2016, this old Theater Dogs blog will celebrate its 10th anniversary, and that makes me mighty proud. This is a labor of love, and I want it to be that first and foremost, a way of celebrating and promoting the riches we have here.

• The Curran Theatre is reborn. For me, the theater event of the year was actually a series of events comprising Curran Under Construction, a reintroduction of the fabled theater by its owner, Carole Shorenstein Hays not simply as a stop for touring shows but as an important player in the theatrical culture of the city. While the theater undergoes renovation in its lobby and restrooms, Hays invited audiences to enter through the stage door and sit on stage to experience one after another shows of extraordinary power and diversity. She began with The Event, a horrifyingly relevant exploration of mass violence, grief and understanding, and moved on to the wildly different but equally thrilling The Object Lesson with Geoff Sobelle blending materialism and memories in a magical way. Dave Malloy’s Ghost Quartet offered whisky, haunting music and one of the year’s best, most immersive stage experiences. Steve Cuiffo is Lenny Bruce brought a favorite son back to San Francisco, and Stew and Heidi Rodewald put their own rock-blues spin on James Baldwin in Notes of a Native Son. Every event at the Curran, including the speaker series hosted by the Curran’s resident literary star, Kevin Sessums, has been glorious and fascinating and involving. What more could you want from theater? (read the original posts here)

• Central Market gets a jewel of a theater in ACT’s The Strand. The Curran wasn’t the only re-birth this year. American Conservatory Theater spent a whole lot of time, money and effort bringing some class to the evolving Central Market area. The new Strand Theater is spectacular and should prove to be a key component in the cultural life of San Francisco. (read the original post here)

• Just Theater blows us away. Again. After A Maze last year, Just Theater became a company I wanted to pay attention to, and boy did that attention pay off. With Jackie Sibblies Drury’s We Are Proud to Present a Presentation About the Herero of Namibia, Formerly Known as Southwest Africa, from the German Südwestafrika, Between the Years 1884-1915 the company emerged as a producer of provocative, impactful work that should attract as big an audience as possible. This play within a play (within a rehearsal) tackled race, history and personal drama in ways that felt mind bending and heart racing.(read the original post here)

• We got to see Angela Lansbury live on stage. Even if she had just stood on stage and waved, that would have been something, but no, Dame Angela, the legend herself, gave a true and truly funny performance as Madame Arcati in the Broadway touring production of Noël Coward’s Blithe Spirit as part of the SHN season. At 89, she defied any signs of age and offered pure magic. Extraordinary. (read the original post here)

• Tuneful time travel in Triangle. The most heartfelt new musical I saw this year was Triangle at TheatreWorks, a time-twisting tale involving tragedy and romance. Curtis Moore and Thomas Mizer have crafted a smart, melodious show that feels original and scaled exactly right (the cast of six feels much bigger, as do the emotions). (read the original post here)

• There’s still life left in Scrooge after all. There’s absolutely no reason that the new musical Scrooge in Love should not become a holiday perennial. Creators Kellen Blair, Larry Grossman and Duane Poole have crafted an utterly charming musical sequel to A Christmas Carol with songs you actually want to hear and characters you root for. Of course having Jason Graae as Scrooge is a big Christmas bonus, so kudos to all at 42nd Street Moon for breaking away from the classic or forgotten musicals and presenting something fresh and fantastic. (read the original post here)

• Alice Munro should love Word for Word. There’s no better theater company than Word for Word and no better writer than Alice Munro, so…mic drop. This was sublime from beginning to end as director Joel Mullenix and a cast that included the wondrous Jeri Lynn Cohen, Susan Harloe and Howard Swain brought two Munro stories to life, one from 1968, one from 2012. There was humor, heart and exquisite writing. (read the original post here)

• Cathleen Riddley lays it bare in Tree. Riddley can always be counted on for a strong performance, but in this powerful Julie Hébert family drama at San Francisco Playhouse she was riveting and heartbreaking as an older woman losing touch with herself and her family. (read the original post here)

• And then the drama comes flooding in. My favorite set of the year was G.W. Skip Mercier’s design for Tarell Alvin McCraney’s Head of Passes at Berkeley Repertory Theatre. Water played a big part in the design of a house in marshy Louisiana territory where the forks of the Mississippi meet. There was a storm, a leaky roof and then a deluge of biblical proportions. And boy was it fun to watch. (read the original post here)

• Hypocrites pummel Pirates perfectly. Probably the most fun you could have in a theater (and not mind getting beaned by a beach ball) was Chicago troupe The Hypocrites’ wild and wonderful take on Gilbert and Sullivan’s The Pirates of Penzance. Berkeley Rep had the smarts to introduce the Bay Area to this smart, enterprising company, and I hope we haven’t seen the last of their inventive, energetic take on interactive theater. (read the original post here) 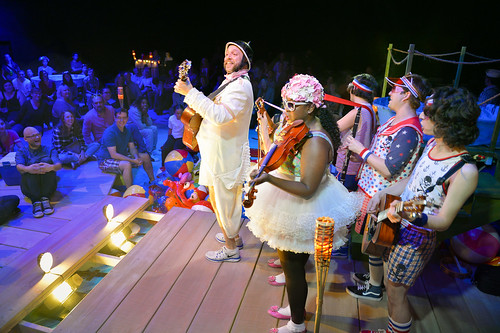 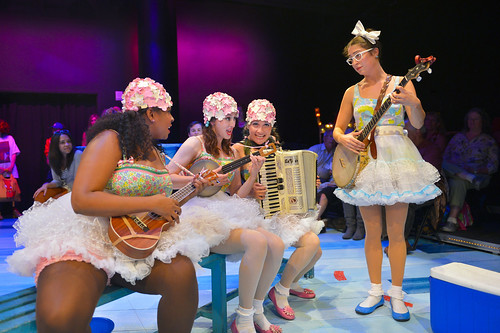