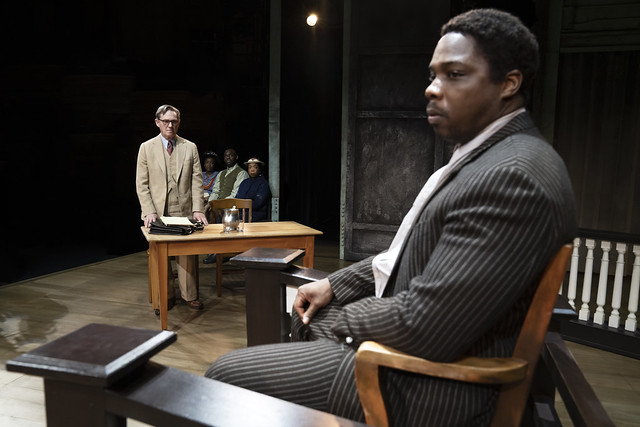 ABOVE: Richard Thomas (left) is Atticus Finch and Yaegel T. Welch is Tom Robinson in Aaron Sorkin’s stage adaptation of the Harper Lee novel To Kill a Mockingbird at the Golden Gate Theatre as part of the BroadwaySF season. BELOW: (from left) Justin Mark is Jem Finch, Thomas is Atticus Finch, Melanie Moore is Scout Finch and Steven Lee Johnson is Dill Harris. Photos by Julieta Cervantes


It would be impossible – some might even call it a sin – to kill To Kill a Mockingbird. Like it or not, Harper Lee’s 1960 novel has become our American story – a novel we revere and teach to children, a movie we idolize, a work of art that we feel pushing us to do the right thing. The book has been banned, debated, cast off as white-savior hokum and generally accepted as a way we address the deeply complicated history of race in America as mainstream entertainment.

And being part of the mainstream, theater has not been left out of the Mockingbird nest. For the last 50 years or so, there had been a serviceable stage adaptation of the novel that was faithfully performed around the world (thank you for your service, Christopher Sergel). That version was essentially erased when Aaron Sorkin, of “The West Wing”/A Few Good Men/The Social Network fame, decided to get into the Mockingbird game with an all-new stage adaptation, which opened on Broadway in 2018.

That’s the version of To Kill a Mockingbird that is now on tour and making its Bay Area premiere at the Golden Gate Theatre as part of the BroadwaySF season. If you are already a fan of Sorkin’s work as either a writer or director, you know you’ll love his attempt to pull Lee’s novel into a post-George Floyd world where it seems every bigoted, violent, closed-minded townsperson from the story makes up nearly half of our American electorate and its halls of power.

If you’re a Mockingbird loyalist, you may not be as thrilled with Sorkin’s changes, especially the way he pulls Atticus Finch down off his pedestal and makes him more of a flesh-and-blood human being. He also makes Atticus more of the play’s focal point than his young daughter, Scout, who is the narrator of the novel. But if you know Sorkin, you know how much sense that makes. Sorkin loves a trial (see A Few Good Men and The Trial of the Chicago 7) – it is theater and religion rolled into one – and rather than leave the pivotal trial in Mockingbird to the end, he starts there and then cannily shifts back and forth through time as he ratchets up tension leading to the jury’s verdict.

There’s so much that’s just plain smart about Sorkin’s approach. He has streamlined the plot (for instance, there’s no Aunt Alexandra, Atticus’ sister) and tried to give the Black characters, like the Finch maid Calpurnia, more weight in the story. In fact, it’s Calpurnia who has some of the show’s most trenchant lines and makes the greatest effort to show Atticus that his optimism, respect and faith that there’s good in everyone could be blinding him to reality and actually causing damage. 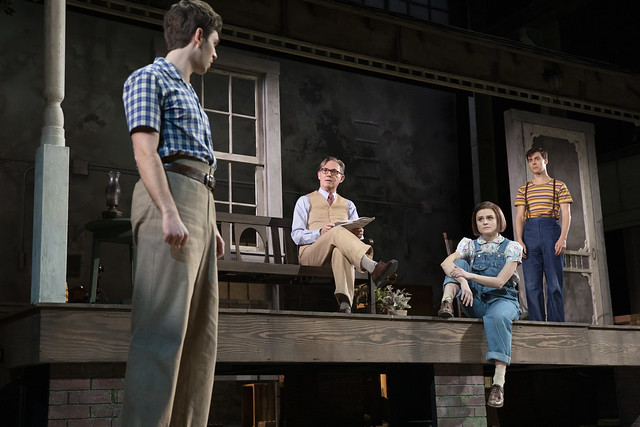 In this version, Atticus does not remain unruffled. He feels like he knows about his fellow townsfolk to know that they’ll ultimately do the right thing, and if you just imagine being in the skin of those with whom you disagree, you’ll be less prone to hate and more inclined to understanding and neighborly love. But then the catastrophic trial in which he’s involved as a defender grows more and more intense, and he can’t quite feel solid ground under his idealism.

That would be an interesting exploration in the 1930s, when the story takes place, in the 1960s, when Lee shared her story and now, when animosity and lies, especially around issues of race, divide the country as powerfully as they ever have.

Sorkin’s restructuring of the story works well for Atticus, and when he gives the character (played on tour by the superb Richard Thomas) doubt and anger and optimism, the mix is emotional and quite visceral. The element of the story that works less well on stage involves the children – Atticus’ kids, Scout (Melanie Moore) and Jem (Justin Mark), and their summer friend Dill (Steven Lee Johnson). Usually I have an aversion to adults playing children, but here, the performers are good enough to keep the cloying cuteness at bay. But their part of the story, especially as the show winds down with an act of violence and an act of courage, doesn’t have the same weight because the best parts of the show don’t really involve them. Still, it’s essential that Lee’s story involve the opening of a child’s eyes to the reality of the world – especially these children, who are living in segregated Alabama. And it’s vital that the kids infuse her story with the hope that children are going to be better and do better than their parents.

That all still comes across in director Bartlett Sher’s fluid, beautifully textured production, but it’s just not as powerful. The racial inequality, the stupid power of mob rule and the failure of the judicial system are vivid and gut wrenching here. But it seems that in the more realistic world of this Mockingbird, optimism and hope will suffer the law of diminishing returns.

FOR MORE INFORMATION
Harper Lee’s To Kill a Mockingbird continues through Oct. 9 at the Golden Gate Theatre, 1 Taylor St., San Francisco as part of the BroadwaySF season. Running time: 2 hours, 35 minutes with one intermission. Tickets are $56-$256. Call 888-746-1799 or visit broadwaysf.com. 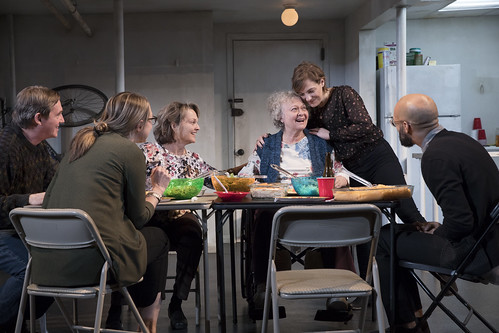 The national touring production of Stephen Karam’s The Humans includes (from left) Richard Thomas, Therese Plaehn, Pamela Reed, Lauren Klein, Daisy Eagan and Luis Vega. The show is at the Orpheum Theatre as part of the SHN season. Below: Sisters Brigid (Eagan, left) and Aimee (Plaehn) confer during the family’s Thanksgiving celebration. Photos by Julieta Cervantes


There’s something so comforting and so terrifying about family. That dichotomy is captured perfectly in Stephen Karam’s The Humans, the Tony Award-winning drama that is now touring the country. The superb production is at the Orpheum Theatre as part of the SHN season.

It’s a rare enough occurrence these days for a play to go on tour, but to have one this entertaining and unsettling is even more reason for celebration (side note: there are almost four times as many producers listed as actors). Karam’s play does something extraordinary by trying to be ultra-ordinary. Working with director Joe Mantello and six finely attuned actors, he is able to replicate reality all the while amplifying it, magnifying it, loving it and revealing its fissures and its darkest, scariest spots.

The play happens on multiple levels – literally and figuratively. The set by David Zinn creates a cutaway look into a dingy two-story apartment in New York’s Chinatown. The first floor is on ground level, the second is underneath in the basement, and the lightless windows look out on a dirty alley (not the “interior courtyard” described by the real estate agents). It’s the new home for young couple Brigid (Daisy Eagan) and Richard (Luis Vega), and though they haven’t received their furniture yet from the moving company in Queens, they’re still enthusiastically hosting Brigid’s family for Thanksgiving dinner.

So on those two levels and over the course of about 90 minutes, we watch a family come together for a holiday. Mom and Dad – Erik (Richard Thomas) and Deirdre (Pamela Reed) – have driven in from Scranton, Pa., along with Erik’s mom, “Momo” (Lauren Klein, reprising her role from the Broadway production), who, in the throes of dementia-induced oblivion, is having a bad day as she is wheeled around in her chair. Brigid’s sister, Aimee (Therese Plaehn), is also there, trying to be cheerful in spite of a broken heart (her longtime girlfriend has split) and an increasingly serious illness.

Everybody’s got their baggage here. It’s individual and it’s collective. There are valiant attempts to keep things light and festive and loving, but that baggage is heavy, and it unloads fear and anxiety at every given opportunity. The contrasting dark and light couldn’t be more pronounced in the physical production, with the split-level set often bright in one half and murky dark in the other (lighting design by Justin Townsend). This is a reasonably happy family – they really do love one another – and yet…what’s so scary about this show (and it does sometimes feel like a horror show) is that love can’t keep the encroaching terror at bay. 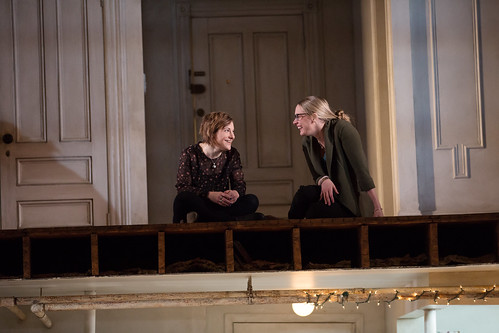 These people are dealing with a hostile world, hostile to their middle-class ways and modest ambitions. As if the illness, employment woes and relationship stress weren’t enough, they also have to contend with the fact that two of their number nearly perished in the 9/11 attack on the World Trade Center. Their woes are internal, familial, national and international. The fact that they can muster any cheer at all as they dine off paper plates and drink champagne out of plastic cups is astonishing.

As with any functioning family (we used to call families dysfunctional way too much, but that still seems like a form of functioning), the jagged edges of hostility and truth occasionally cut through the civility and affection. Each time that happens, it’s harder to regain equilibrium. But someone usually manages, and that someone is most often Richard (a charming Vega), who is still getting to know his girlfriend’s family. Everyone else is too immersed in their problems to remain fully buoyant. The most unstable is the patriarch, Erik (beautifully, poignantly played by Thomas). He’s got physical back pain, he has gone through major work trauma, he’s barely affording medical costs for his mother, he survived a terrorist attack and he is suffering the ramifications of a terrible life decision. It’s no wonder that the anxiety attack the audience is allowed most deeply into is his – and we’re in to the point of practically seeing the monsters that haunt his dreams.

As Deidre, Reed is a marvel in the way she creates such a complex, believable woman who relies on her faith to keep her going. Her burdens have been fierce – among others, her decades-long job has her paid less than the 20somethings who are now her bosses. She perceives and processes a lot more than most around her would credit, but she is stalwart. She is taking strength where she can, marching forward on her arthritic knees, one painful step at a time.

The daughters demonstrate interesting differences in maturity. Plaehn’s Aimee is worn down by illness, heartbreak and job loss, but she’s a grown-up. You can see a lot of her mother in Aimee just as you can see Erik in Eagan’s Brigid, who’s trafficking in cockiness and insecurity to levels that are as annoying as they are endearing.

And Klein as Momo offers some of the evening’s most chilling and affecting moments by doing so much with so little.

The Humans is an incredibly understated play. It doesn’t offer the screaming family drama of, say, an August, Osage County. Nor is it after reassuring “love conquers all” platitudes. No, this is a family drama for our dark, troubled, defeating times. Love and family, so often the solid center, somehow don’t seem to generate enough light for this particular darkness. And that, is terrifying.