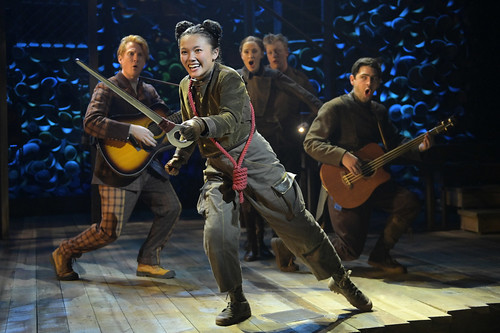 
There are so many charming, astonishing, inspiring moments in PigPen Theatre Co.’s The Tale of Despereaux you have to stop logging them and simply realize that, from beginning to end, this is exactly the show we need this holiday season.

Berkeley Repertory Theatre has a long tradition of bringing inventive, highly theatrical shows to its stage this time of year (the wondrous shows of Mary Zimmerman and Kneehigh come immediately to mind), and this year, we get a wildly wonderful Despereaux from PigPen Theatre Co., a group of friends who met and began making theater and music at Carnegie Mellon School of Drama in 2007.

And while it’s easy to see why the handmade quality PigPen’s exuberant storytelling is so well suited to the stage adaptation of Kate DiCamillo’s Newberry Award-winning 2003 novel. But this production is a little fancier than that. It’s financed by Universal Theatrical Group, the stage arm of the movie studio that made the 2008 animated Despereaux novel, and it’s co-directed by PigPen and Marc Bruni, who also helmed the Tony-winning Beautiful: The Carole King Musical.

The stage Despereaux, which is acted, played and sung entirely by the 11-person ensemble, had its premiere last summer at San Diego’s The Old Globe, and one would guess that a new musical this good will go on to a long life wherever it wants to go. 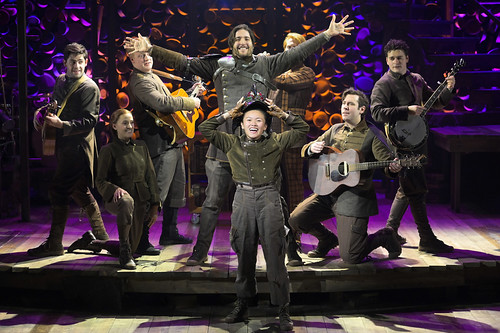 Like the novel, this musical is about finding the courage to be the one who makes a difference, fights for justice and overcomes preconceived notions of who someone should be. In this particular story, the hero is a mouse with giant ears (not Mickey, that’s a different movie studio) who, inspired by the story of a knight’s quest, determines to bring light back to the now-darkened kingdom where he and his family live.

Young Despereaux (played with verve by Dorcas Leung) lives in castle clouded with grief. Years before, the queen’s heart stopped at the sight of a rat in her soup. Since then, rats and soup have been forbidden, and the sad king (Arya Shahi) and his daughter, the Princess Pea (Yasmeen Sulieman), live a quiet, isolated life. They don’t throw parties or have feasts, so the crumb quotient for the castle’s mice population is alarmingly low, though the red-eyed rats that inhabit the castle’s darkest, dankest basement don’t seem to be suffering near as much.

One visit to the castle’s library and an encounter with the tale of a brave knight (Dan Weschler) is all it takes to ignite Despereaux’s warrior heart and a desire to fulfill his destiny as a hero. But first he must deal with the mice, who fear any change to the status quo, and the nasty rats in the basement, especially their leader, Roscuro (John Rapson, deftly capturing the light and dark of chiaroscuro). He breaks rules and tries to keep the faith that what he’s doing is right and just (not an easy task).

From beginning to end, this 90-minute treat is chock full of appealing songs with a Celtic pulse, performed with gusto by the ensemble. The voices are glorious (especially Sulieman’s princess, Betsy Morgan’s Miggery Sow and Rapson’s Roscuro), and the stage is alive with beautiful images. There’s a strong theme of light and dark built into the story, so the lighting by Donald Holder takes on significance beyond the beautiful way it illuminates the rough-hewn timber and crockery of Jason Sherwood’s castle set.

At the opening-night performance (Monday, Nov. 25), Berkeley Rep’s Roda Theatre was filled with children, and it’s a testament to the performers on stage (and to the parents) just how well behaved the audience was. Director Bruni and his ensemble manage to keep up the pace of the show without ever making it feel rushed. There’s time for ballads and introspection and shadow puppetry. And it’s absolutely enchanting the way the company uses stuffed mice and rats to convey the size difference between the animal characters and the human characters, all the while keeping us emotionally invested in every inter-species interaction.

The Tale of Despereaux is neither corny nor sappy the way entertainment aimed at all ages can sometimes be. Rather, this is rich, emotional, rewarding theater that pulls us all into its story of the littlest guy choosing to make the biggest difference.