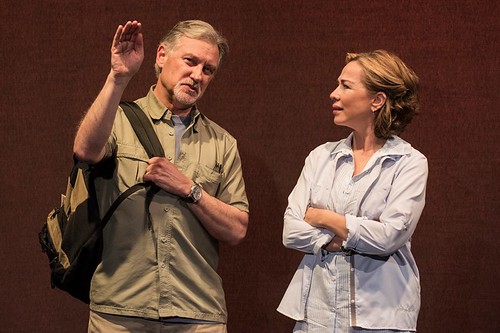 John Walker and Pamela Gaye Walker star as a married couple at a crossroads in Garret Jon Groenveld’s The Empty Nesters, part of the 19th annual PlayGround Festival of New Works at the Thick House. Photos courtesy of mellopix.com


A marriage heads over a cliff, literally, in Garret Jon Groenveld’s The Empty Nesters, a co-production of PlayGround and Virago Theatre Company and part of PlayGround’s 19th annual Festival of New Works.

Luckily, the cliff in question is on the western rim of the Grand Canyon, and there happens to be a popular tourist spot called Skywalk that allows visitors to make a u-shaped jaunt on a glass walkway, with the canyon floor more than 3,000 feet below them.

The visitors making this trip are Frances and Greg, played by real-life husband and wife, Pamela Gaye Walker and John Walker. They have just dropped off their young child, a daughter, at college. Their older child, a son, is a college junior, which means that when they return to their Los Angeles home, that home will be what they call in the parenting business, an empty nest. “We have two kids out of the house,” Greg says. “But somehow they cost twice as much.”

While waiting in line for the glass-bottom trek, amid a lot of familiar-sounding squabbling of longtime marrieds, Frances drops a bomb that throws this little Arizona sojourn into a whole different light.

San Francisco playwright Groenveld offers three distinct chapters in this tale of a day in the life of a marriage at a crossroads. The first is at the canyon’s rim. The second is in a busy café, and the third is in a nearby hotel room. Each section delves deeper into the nature of this marriage, which actually seems to be a sturdy marriage built on love and companionship and not a lot of excess drama. At play’s end, just over an hour after it began, Groenveld makes a bold shift in his storytelling that turns Frances and Greg into characters in their own story as they recount a seemingly unimportant few minutes that turns out to be much more vital than they realized. 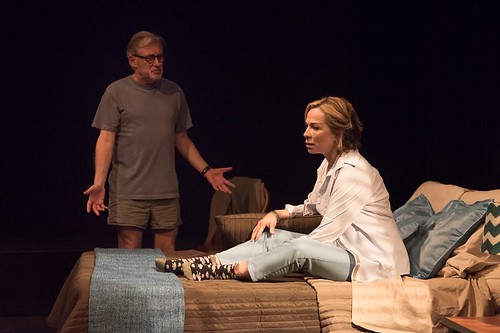 Directed by Amy Glazer, The Empty Nesters has a natural rhythm that subtly builds tension and deepens the connection between husband and wife, thus raising the stakes. Married 25 years, Frances and Greg have fallen into distinct patterns of disengagement with each other. She has focused primarily on work and the kids (mostly the kids). He has focused on work and sports (mostly “SportsCenter,” the Dodgers, the Lakers and televised poker tournaments). Now that it’s just them again, they have a big readjustment to make.

They acknowledge that they knew this time would come, but it came more quickly than they realized, with the surprise being an unexpected, unfamiliar and uncomfortable stretch of mid-life without children and retirement still years away. We’ve seen bickering couples with faltering marriages before, but this couple feels more grounded in reality.

It’s never a sure thing that hiring a married couple to play a married couple is going to work in the characters’ favor, but here, under Glazer’s sure directorial hand, there’s a big payoff. The Walkers give us recognizable types – he’s whiny and a little clueless, she’s constantly annoyed and feeling unseen. But Groenveld takes us beyond those façades, and the Walkers open up the emotional lives of these spouses with warmth and compassion. It’s also helpful that there is abundant humor. They’re going through a rough patch, but they both get off a few good laugh lines every now and then.

Once we’re into the motel room scene, it’s easy to empathize with Frances and Greg – there’s no real bad guy…other than time and marriage (or the challenge of) itself. There’s a kind of sexual tension hovering over the scene – not the good kind – and you begin to see how they could easily break apart at this point. But you also sense the depth of their connection and feel the enormity of what they have to lose. That’s what gives The Empty Nesters its edge and makes it feel much heftier than its brief running time. Pamela Gaye Walker (left) is Janice and Sarah Nealis is Eliza in Theresa Rebeck’s incendiary workplace comedy What We’re Up Against at the Magic Theatre. Below: Rod Gnapp (left) is Ben and James Wagner is Weber. Photos by Jennifer Reiley

Playwright Theresa Rebeck, a master of barbed contemporary dialogue, conducts an interesting experiment in the Magic Theatre’s world premiere of What We’re Up Against.

Her Petri dish is a big-city architectural firm – all glass and metal in Skip Mercier’s sleek, mostly black, white and gray set. Her chosen bacteria: the architects, all of whom turn out to be antiseptic assholes.

The architects at this particular firm are mostly isolated from the outside world. We hear about some client interaction, but the focus of their activity is internal. There’s not talk of spouses, significant others, children, parents, pets, groceries or dry cleaning. This nearly two-hour, two-act drama (with some hearty if stinging comedy) has a sharp focus and that is unpleasant behavior from unpleasant people.

“This is no one’s finest or most shining hour,” one architect says toward the end, and that’s so true. But it’s fascinating to watch people being ruthless in everyday, creepily corporate ways.

From the first scene, between Warren David Keith as Stu, a boozy senior architect and Rod Gnapp as Ben, a less senior but vitally important architect, we get hammered by Rebeck’s sharp dialogue. You can hear Mamet-like rhythms in the chatter – as when speakers interrupt themselves mid-sentence – but Rebeck’s dialogue is more engaging, less slick. Stu, who is enormously threatened by women in the workplace, talks a lot about his balls (especially about them being cut off) and about systems and rules. Both men say things like “What I’m saying” or “I’m telling you” or “Listen!” They desperately want to be heard (and acknowledged or, better yet, praised) but say the same thing over and over.

There’s discord at the firm because a hotshot young architect, Eliza (Sarah Nealis) is going against the corporate grain and not keeping her mouth shut. It’s not that she doesn’t have enough to do –she doesn’t have anything to do. With too much time on her hands and her abundant talent going untapped, she stirs up trouble.

The other woman in the firm, Janice (Pamela Gaye Walker), makes a feeble attempt to comfort the distraught younger woman, but she makes abundantly clear that just because they’re both women, they are not allies.

The one sort of superfluous character here is Weber (James Wagner), a golden boy who’s been at the firm a shorter time than Eliza. He talks a good game, like when discussing strip malls: “The human heart meets the void in these places and shops anyway.” And he can keep up with the scotch-swilling other boys, but he’s a dolt. “History is a fiction,” he says. “But it’s a sustainable fiction.” He serves his purpose in the plot, then he disappears.

Director Loretta Greco, the Magic’s artistic director, keeps the pace swift and the action intensely focused. She gets a superb performance from Nealis as the complex Eliza, who, you get the impression, would behave less horrifically if she were given the respect she deserves.

The amazing Gnapp goes on a verbal rampage in Act 2 about something central to the plot – air ducts in a mall remodel – and almost chokes himself on his words before observing, “It’s a relentless metaphor for why we can’t breathe.”

It’s interesting that the sexual element of the male-female dynamic in this workplace is barely addressed – perhaps that’s because Rebeck’s experiment is too focused. Sex is messy and real, and these people, in their slickly casual but expertly fitted clothing (by Alex Jaeger) are removed from the reality outside Rebeck’s microscopic lens.

This laboratory yields compelling results, but the experiment seems unfinished. The play ends, but the bad cells, you can feel, just keep multiplying.