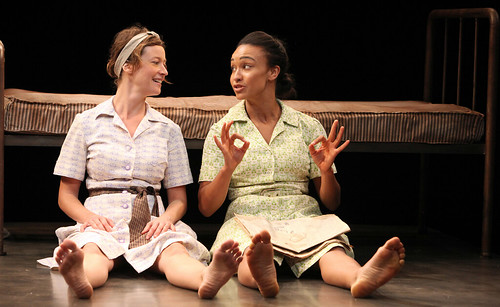 Jessi Campbell (left) is Dee and Tristan Cunningham is Jamie in Naomi Wallace’s And I and Silence at the Magic Theatre. Below: Angel Moore is young Jamie Siobhan Marie Doherty is young Dee when the two women met in prison. Photos by Jenifer Reiley


In Naomi Wallace’s And I and Silence now at the Magic Theatre we meet two interesting women, Dee and Jamie, who became friends while in prison. Both are in for nine-year stints, and as their bond intensifies, they begin to train one another for a life after prison – a life that will include the two of them together. As lovers? As friends? Not quite clear. But given that Jamie is black and Dee is white and their release will occur in the late ’50s, there are all kinds of complications to contemplate.

Rather strangely, the flashback scenes to the prison feel freer and more fun than the scenes set in the weeks after their release. Issues of race and sexuality seem to matter less in prison than they do in the world outside of it, which makes for a fascinating contrast of time and place. In the “present,” Jamie and Dee have to deal with the oppression and cruelty of racism and misogyny and are not able to wield the confidence or creativity they each seemed to have in prison.

Wallace’s play, directed by Loretta Greco is simple and fairly straightforward. It’s a lean sort of drama that requires a simple set – designer Daniel Ostling provides a skeletal bed on a raised platform and some water buckets – and only four actors: present day Jamie and Dee in the free world (presumably somewhere in the South) and Jamie and Dee nine years earlier in prison. Jessi Campbell and Tristan Cunningham are the older women, while Siobhan Marie Doherty and Angel Moore are the younger. All are compelling, though it grows increasingly more difficult to navigate the shifts in tone and character between the two time periods. 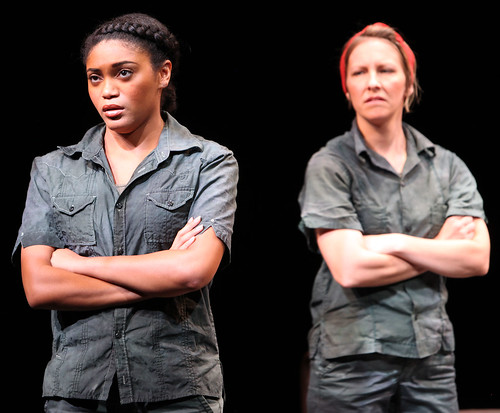 And I and Silence, which takes its title from Emily Dickinson’s “I felt a Funeral in my Brain,” is sensitive – sensitive almost to a fault. There are times the play can come across as precious, and too often it’s just plain slow. In its bouncing back and forth between the past and present, Wallace’s script goes for lyricism and the poetry that can enliven even the bleakest of situations. But without much in the way of plot, the play slips further and further away from reality and the weight of real life and more into the realm of lovely playwriting. The flashbacks, especially, don’t feel related to the reality of a woman’s prison (we’re told about what that world is like, the cruel guards, the punishments, the violence but we never feel it). The prison scenes feel like a courtship, a friendship (or more) burnished in survival. The women share a hope for the future, a future in which they will work as domestics. They put each other through the intricate paces of training to work with difficult bosses, but when they’re out and looking for employment, the world is a lot rougher and crueler than anticipated.

By play’s end, which is heavy indeed, real life intrudes, but even then, it still feels distant, as if reaching in from a different play. There’s a danger in dealing with a story of women in prison and an unconventional love story of tipping into pulpy melodrama. That doesn’t happen here – not by a long shot – but Wallace is almost too careful. The power of the drama, the connection between the characters (young and old) and the increasing tension that should accompany the women’s journey diminishes when we’re craving intensity. In terms of emotional volume, this Silence could be louder.