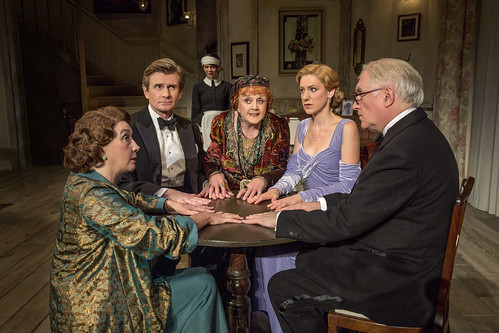 The North American touring cast of Noël Coward’s Blithe Spirit includes (from left) Sandra Shipley as Mrs. Bradman, Charles Edwards as Charles Condomine, (background) Susan Louise O’Connor as Edith, Angela Lansbury as Madame Arcati, Charlotte Parry as Ruth Condomine and Simon Jones as Dr. Bradman. The play is at the Golden Gate Theatre in San Francisco as part of the SHN season through Feb. 1. Below: Stage legend Lansbury won a Tony Award in 2009 for playing spiritualist Madame Arcati. She reprises the role on tour. Photos by Joan Marcus


Is anyone in the theater world more spirited than Angela Lansbury? She has been giving great performances on stages and screens of various sizes for 70 years. She has every right to rest on her laurels and be adored as the legend she is. But not right now. She has work to do.

At 89 (you’d never know it by watching her on stage), Lansbury is taking a victory lap, a final North American tour in Noël Coward’s Blithe Spirit. She is playing oddball spiritualist Madame Arcati in director Michael Blakemore’s production (part of the SHN season). It’s a role that earned her a fifth Tony Award in 2009. To be clear, this is as sturdy a production of Coward’s 1941 comedy as you’re likely to see, performed with wit, sophistication and, perhaps surprisingly, heart. The cast is excellent, the design just right and the sound (in the cavernous Golden Gate Theatre) startlingly clear. But you come to this production first and foremost for Lansbury, and she is every bit the warm and wonderful genius you want her to be.

The trick to playing Madame Arcati – a psychic, a medium, a kook – is that she must be 100 percent in earnest. She has a firm belief in her power to communicate with the spiritual world, a power she inherited from her mother and discovered at age 4. She also has a starchy British resolve and trucks no nonsense in a field filled with nonsense and charlatans. She gets around the English countryside on her bicycle and keeps her strength up with Ovaltine. In the spirit realm, her “control” (or spirit guide) is 9-year-old child named Daphne, and to reach her, Madame Arcati (we never learn her first name) must put herself in a trance by performing various rituals, including a spastic dance that Lansbury performs to hilarious effect. 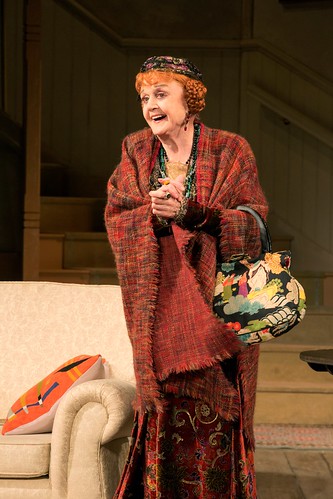 The more serious Madame Arcati is, the funnier and more endearing she is. You know the actor in the role has succeeded when, after a successful séance, Madame Arcati takes her leave and the guests at the séance laugh and laugh to the point that you actually feel bad for the medium, whose sincerity, if nothing else, should command a little more respect.

Whenever Lansbury is on stage, this Blithe Spirit is heavenly. Outfitted like a walking gypsy caravan (by Martin Pakledinaz), Lansbury commands attention not because she is grandstanding in any way – she’s very much a member of the company – but because she’s Angela frickin’ Lansbury and she’s putting on a marvelous show.

The other members of the company fare well, especially Charles Edwards (Lady Edith’s missing baby daddy on “Downton Abbey”) as author Charles Condomine and Charlotte Parry as his second wife, Ruth. As the ghost of Charles’ first wife, Elvira, Jemima Rooper must contend with a terrible gray wig and a costume (by Simon Higlett, who also designed the cozy cottage set) that makes her look like a pillow in loose casing. As onlookers Dr. and Mrs. Bradman, Simon Jones and Sandra Shipley are stalwart souls, and Susan Louise O’Connor as daffy maid Edith is a hoot.

One of the most enjoyable aspects of Blithe Spirit is how quickly scorn of all things supernatural turns into utter belief (and contempt) once the ghost of Elvira begins haunting the premises. Death is handled so blithely that it hardly seems worthy of grief. Why be sad when it’s so easy to bring people back from the everlasting whatever (where, according to Elvira, you kibbitz with Genghis Khan and Joan of Arc is a barrel of laughs)? That’s where Blithe Spirit, truly an odd comedy, finds its edge.

But its heart, at least in this production, lies with the kook. Angela Lansbury is a joy, and this play is delightful showcase for her prodigious gifts and a wonderful way for her fans to acknowledge an extraordinary body of work that just continues to grow.

[bonus video]
In honor of Angela Lansbury’s triumphant return to the stage, here is a compilation of her Tony Award wins minus her win for Mame, which was before the Tonys were nationally televised. She won Tonys in 1966 (Mame), 1969 (Dear World), 1975 (Gypsy), 1979 (Sweeney Todd) and 2009 (Blithe Spirit).