I recently had the pleasure of sitting in the studio with Chloe Veltman, host of the KALW radio show “Voicebox.” Our topic of the evening was singing actresses. More specifically, we discussed the staggering talents of Barbra Streisand and Meryl Streep, both of whom apply their prodigious acting skills to some marvelous song performances. Of course Streisand is as well known as a singer as she is an actress, but Streep is full of wonderful surprises as a singer. Joining us on the phone from New York for the show was the remarkably eloquent Ann Hampton Callaway (seen at right; photo by Bill Westmoreland), a singer and songwriter of note who also happens to have penned some tunes for Streisand (including the beautiful song “I’ve Dreamed of You,” which Streisand sang at her wedding to James Brolin).

Callaway brings her show of songs from the Streisand songbook to the San Francisco Symphony’s “Summer and the Symphony” season on Tuesday, July 3. Tickets are $15-$80 and available at www.sfsymphony.org or 415-864-6000.

Now here’s the song Ann Hampton Callaway wrote for Barbra Streisand’s wedding to James Brolin (the performance is from the 2000 Timeless tour; the Spanish subtitles are a bonus). The Callaway lyrics are set to a melody by Rolf Lovland.

I know some people who have just flipped over the movie version of Mamma Mia! now plaguing movie theaters. I am not among them.

I also adore Meryl Streep when she sings, as she does so brilliantly in Ironweed, Postcards from the Edge, Death Becomes Her and A Prairie Home Companion. I was, however, unprepared for just how ineptly made the movie version of Mamma Mia! was. Director Phyllida Lloyd, who also directed the stage version, had no idea what she was doing, and she and screenwriter Catherine Johnson (who also penned the show) had absolutely no new ideas about turning a stage show into a movie. They even use obvious theatrical lighting for several of the numbers…and all of this is happening on a real Greek island (a Greek island, I might add, that often looks like a soundstage, even when it isn’t). Dumb, dumb, dumb.

Early on I was annoyed by how Lloyd hardly ever let a scene just transpire. She didn’t let actors talk or even complete a sentence without the camera jumping or the awkward of dubbing of lines attempting to smooth over a rough edit. She makes Streep come across strident and ridiculous (and MUCH too old – at nearly 60, Streep looks great, but when we’re spending so much talking about her wild summer 20 years ago when she got pregnant by one of three possible boyfriends, we have to think: What’s wrong with this 40-year-old woman who can’t seem to get her life together?). And she wastes the abundant talents of Julie Walters, sidelined in one of the “best friend” roles. Oddly, Christine Baranski, another of the best friends, gets the movies best number, “Does Your Mother Know,” because the number is contained, and we’re able to get a real sense of Baranski’s performance. This is unlike Walters’ big number, “Take a Chance on Me,” which ends up scrambling across rooftops and making Walters dangle from a roof like a damsel in distress. Horrible.

The closing credits, with the full cast decked in ’70s ABBA finery, could have been fun, but in my bad mood, cultivated by every frame of the movie, I wanted to throw Pet Rocks and burning bras at the screen.

I will say I’m happy that Mamma Mia! is making money because I want the movie musical to continue, despite this creative setback.

But from what I’ve heard, we’re heading into risky territory with upcoming cinematic musical projects.

First, they want to make a sequel to the movie musical Hairspray. A sequel. Never a good idea. The entire creative team from the movie musical (including director/choreographer Adam Shankman and composers Scott Wittman and Marc Shaiman) will be on board. Shankman told Variety: “I never thought of musicals as franchises, but it certainly worked with High School Musical, and the idea of working with that cast again, and creating new material and music, is a dream come true. John (Waters) has such an original and extraordinary voice; we all can’t wait to see what he has come up with.”

God only knows what they’ll come up with, but my feeling is they should leave well enough alone. 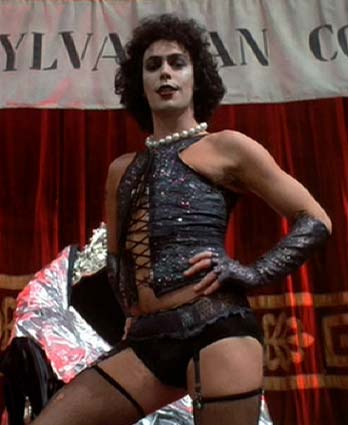 And here’s another unnecessary project: It’s time to do the “Time Warp” again. MTV is going to remake The Rocky Horror Picture Show. Yes, the 1975 movie that became a midnight cult classic and inspired more men to wear makeup and fishnets than any other film, is going to be made for TV. Maybe in time for Halloween and maybe with some of the music from the stage show that didn’t make it into the movie.

Are there no original ideas left in the world of movie musicals? What’s next, a remake of My Fair Lady? Oh, wait! Yes! And Emma Thompson has been tapped to write the screenplay with Keira Knightley as Eliza Doolittle.

Originality sure ain’t what it used to be. I’m scared that the movie musical I’m most looking forward to – based on one moment in the preview that takes place on the basketball court and in the bleachers – is High School Musical 3.

Just for kicks, let’s actually do “The Time Warp” again.

Got a little excited when I saw the Mamma Mia! trailer in a movie theater recently. With the success of Hairspray last year, it looks like summer is becoming the season for frothy stage musicals turned silver screen tuners.

Here’s one of the trailers. I like this one because it actually shows Meryl Streep singing.

Here’s the trailer I saw in the theater:

Aaargh! The tyranny of ABBA! Why is that music so fun? Mamma Mia! the movie opens July 18.

Today (Sept. 1) is Lily Tomlin’s 67th birthday, so let’s all take a moment to appreciate her genius.

Most recently, Tomlin was a marvel in A Prairie Home Companion, my favorite movie of the summer. Watching Tomlin and Meryl Streep play

singing sisters is such an enormous pleasure. Their first number, “My Mississippi Home,” is so fun you don’t want it to end (and Tomlin’s bass harmonies are not too shabby). But their second duet, “Goodbye to My Mama,” will cleft your heart in twain.

Five years ago, Tomlin was in San Francisco with her extraordinary one-woman show The Search for Signs of Intelligent Life in the Universe. The opening came very shortly after the events of Sept. 11, and The Search was like a spiritual balm. Connecting to Tomlin’s universe (and to that of her partner/writer/director, the elusive, equally brilliant Jane Wagner), was exactly what we needed.

Shortly after my review of the show ran, I heard from some friends that Tomlin had been on a morning radio show (I think it was KFOG – at least I hope it was KFOG, the only morning radio crew I can stomach) and she had read pretty much my entire review on the air. I was kind of knocked out by that because Tomlin has been a hero of mine for as long as I can remember (I may be the only fan of The Incredible Shrinking Woman)

Long story short: I did the very un-professional thing and went back to see the show, hung around afterward and met Tomlin. I introduced myself, and her first words to me were astonishing: “Oh, I’m so glad I didn’t know you were in the audience. I’d have been so nervous!” Maybe she says that to everyone, but it sure made me feel important.

Then, when she signed my program (yes, I’m a complete fan/nerd – I even had a picture taken), she wrote, “Thanks for being such a good writer.”

For me, that was better than winning the Pulitzer.

One more thing about that meeting: when she hugged me, I couldn’t help noticing that she smelled extraordinarily good.

So Lily, if you’re reading (and of course she’s reading — isn’t everyone?), happy birthday. Thanks for all the work through all the years. There’s still a whole lot more to come. And please, PLEASE come back to the Bay Area soon.