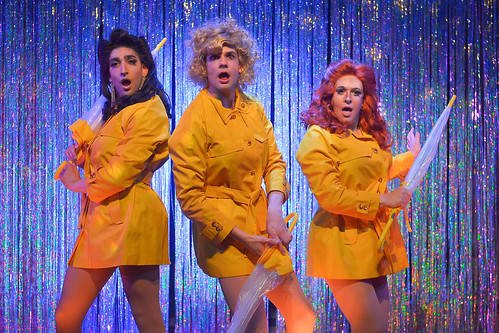 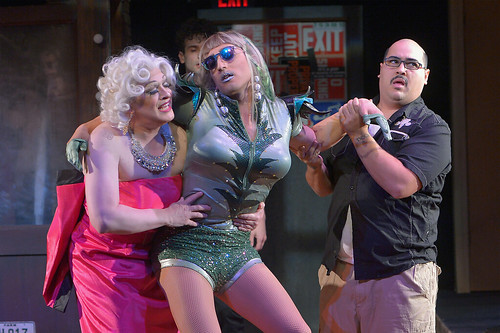 Tobie Windham (left) is John, L. Peter Callender (center) is Simon and Nicholas Pelczar is Caleb in the Bay Area premiere of Matthew Lopez’s The Whipping Man at Marin Theatre Company in Mill Valley. Below: Windham’s John and Pelczar’s Caleb fall into the chaos of life after the Civil War. Photos by Kevin Berne


If Matthew Lopez were a miner, he could brag that he uncovered a rich mineral vein of enormous wealth, both cultural and commercial. But Lopez isn’t a miner. He’s a playwright, and though there are similarities to be sure, what Lopez brings to the surface in his fascinating play The Whipping Man is a mostly untold chapter of American history with deep spiritual resonance.

Lopez, whom Bay Area audiences met earlier this year when his play Somewhere ran at TheatreWorks, is a young playwright of note. The Whipping Man is the play that first brought him notice, and it receives its Bay Area premiere courtesy of Marin Theatre Company and co-producer Virginia Stage Company and in association with San Francisco’s Lorraine Hansberry Theatre.

The great thing about this co-production is that we are on the latter half of it, which means the cast of Bay Area actors – L. Peter Callender, Nicholas Pelczar and Tobie Windham, all of whom start out being at the top of their game – have had the benefit of a full run in Virginia and extra rehearsal in Marin with director Jasson Minadakis. The result is a riveting two hours of finely tuned performances so in sync with one another the play is elevated to an astonishing level of immediacy and impact.

Act 1 is mostly set-up, as we meet wounded Confederate soldier Caleb (Pelczar) returning to his family’s decimated Richmond, Va., plantation (the ruins of set is by Kat Conley) in mid-April, 1865. The Civil War is over, and though Caleb is thrilled and relieved to meet Simon (Callender), one of his family’s slaves, there’s a new tension between them, especially when Caleb orders Simon to do something instead of asks – as if he were still the owner and Simon still the property. With the arrival of John (Windham), another former slave from the estate, the trio is complete, although John brings with him a whole lot of uncertainty. He’s been looting the neighboring plantations, and there’s something he’s not telling. There are, in fact, secrets all around, but there are two pieces of business that need to be addressed more immediately.

The first is Caleb’s leg would – he was shot in the Battle of Petersburg, the final humiliation of four years at war. Simon recognizes gangrene and knows decisive action must be taken to save Caleb’s life. The other issue is Passover. Caleb’s family is Jewish, and the slaves raised on the plantation have also been raised Jewish, so Passover is a major holiday. Simon and John are up for improvising a Seder, though Caleb’s war experience has led him to a crisis of faith.

There’s more juicy drama packed into Act 1 involving emancipation, romance and betrayal, but the real heart of The Whipping Man emerges in Act 2 when the three men begin the ritual of the Passover Seder, and the words about being freed from the bonds of slavery take on even deeper meaning, and the ritual quickly becomes raw emotion.

These extraordinary scenes also beg certain questions, like how is it that Jews in the South had slaves? It’s a fact that they did, but how did a people whose freedom from slavery in Egypt has become a touchstone in their religion, reconcile that with actually owning slaves? And feeling the power of the Passover ritual acted out in those confusing, exciting, dangerous post-war days also exposes the absence of a dignified commemoration or ritual in this country’s relationship with the end of slavery. How do we go from generation to generation ensuring that the enslavement of one people by another never happens again?

Well, theater is ritual, so in a way, The Whipping Man serves a purpose greater than an evening’s entertainment. Lopez is a compassionate writer, and his characters – even the touchy John – are full of complex emotions and, in spite of obvious obstacles, a strong sense of family and kinship to one another.

All three actors are superb, but Callender just ignites the play in Act 2. His Simon conducts the Seder as if it’s the first time such a service has ever been held, with every word and gesture infused with meaning and spiritual connection. It’s a beautiful performance.

On one level, The Whipping Man is a thoroughly enjoyable Civil War melodrama, on another, it’s a much more significant glimpse into the nature of faith and how it connects us and into the upheaval of great historical moments and what we do – or fail to do – in their wake. 
In my interview with Priscilla Lopez (see below for the link), the original Diana Morales in the landmark production of A Chorus Line, she calls Somewhere, the play written by her nephew Matthew Lopez now at TheatreWorks, a “dance-ical,” meaning not a play exactly, not a musical exactly but a drama infused with dance. That’s a great way to describe the show, which features a number of dance sequences.

I reviewed Somewhere for the Palo Alto Weekly. Here’s an excerpt:

If you could distill American drama down to two themes, they might be family and dreams, especially if dreams can also encompass delusions. Lopez’s play, which had its premiere last fall at San Diego’s Old Globe and has been seriously revised for its bow in Mountain View, is all about a family of dreamers.

That’s the truth. How else to account for just how happy the Candelarias are when the reality of their situation could make for a depressing evening of theater.

[bonus interview]
I had the pleasure of interviewing Tony Award-winner Priscilla Lopez for a story in the San Francisco Chornicle. Read the story here.

FOR MORE INFORMATION
Matthew Lopez’s Somewhere continues through FEb 10 in a TheatreWorks production at the Mountain View Center for the Performing Arts, 500 Castro St., Mountain View. Tickets are $23-$73. Call 650-463-1960 or visit www.theatreworks.org.