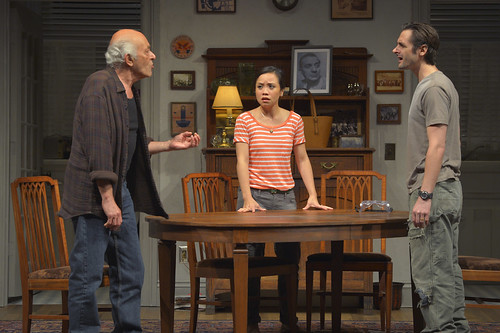 
There are probably more English words in Tony Kushner’s new play than not in the new play. So many things about The Intelligent Homosexual’s Guide to Capitalism and Socialism with a Key to the Scriptures are staggering (including the title), but chief among them is the amount of dialogue – the number of choice words, the overlapping layers of lively conversation, the sheer volume of communication, attempted and otherwise.

If Angels in America was Kushner at his most Kushnerian – fantastical, political, emotional, hysterical, profound – then iHo (as the play is known) is Kushner at his most ktichen sink-ian. Steeped in American greats like Arthur Miller, Eugene O’Neill and Tennessee Williams, Kushner zeroes in on a family in crisis. This is reality, but a hyper-reality where everyone is as smart and funny as Kushner (and wouldn’t that be an interesting reality)

Of course this family is going to be fully of verbally astute people with complex histories intertwined with important elements of American history. In this case, those roots extend deep into the American Communist Party, labor issues and union organizing. The central character started out as a longshoreman, but he could have been a classical scholar. Retired for years from the world of strikes and meetings and hard labor, Gus Marcantonio (Mark Margolis) has taught himself Latin and is translating the Epistles of Horace in the Brooklyn brownstone that has been in his family for generations. He also has Alzheimer’s – or so he says – and is planning on committing suicide. His sister Clio (Randy Danson), a sort of spiritual seeker, has insisted that he inform his three adult children of his choice before he goes through with it. 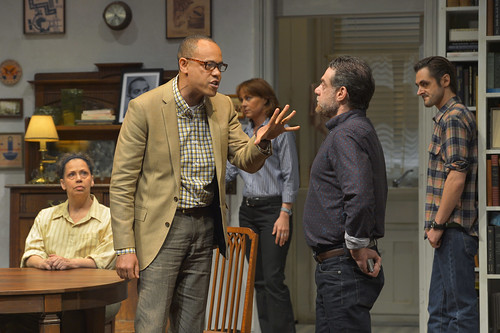 Then comes the maelstrom known as Pill, Empty and Vito. Yes, those are the children’s names. Pill (Lou Liberatore) is in from Minneapolis with his professor husband, Paul (Tyrone Mitchell Henderson), and the state of their marriage is…fraught. It seems Pill has borrowed a considerable amount of money from his sister and spent it all on a hustler with whom he’s in love (Jordan Geiger as Eli, perhaps the most intellectual, Yale-educated prostitute in Manhattan). The obsession with paying for sex and the fact that Pill has fallen hard for Eli has not been a good thing for the marriage, to say the least.

Sister Empty (Deirdre Lovejoy) was a doctor, then a nurse and is now a labor lawyer. She’s partnered with Maeve (Liz Wisan), a social theologist who is about to give birth to their first child. Empty has no real maternal instincts, though that may have something to do with the fact that she’s going to be the mother of her nephew. The women used Empty’s little brother, Vito, as the sperm donor.

Vito (Joseph J. Parks) is a contractor, married (to Sooze, played by Tina Chilip) with two kids and designs on his dad’s brownstone. Like so many people in his family, he’s quick to anger, but that anger is fueled by a fierce (and fearsome) intelligence that makes his roaring all the more compelling.

Director Tony Taccone manages to deliver a nearly four-hour production that is never dull (I’ve seen many shorter plays that seemed much longer) and is, by turns, exasperating, fascinating, gripping and, in moments, mind blowing. Taccone’s long relationship with Kushner stretches back to the commissioning of Angels, and it seems Taccone is exactly the right director to layer Kushner’s word- and intellect-rich script with reality and theatricality. He can provide blur or focus in exactly the right places. There are scenes in which every character (or nearly) is on stage talking at the same time. There are multiple dramas unfolding in every corner of Christopher Barecca’s stunning, multi-level brownstone set. Siblings are fighting, spouses and fighting, parents are fighting, and even in the chaos, Taccone manages to pull focus in precise places and then release it to the general hubbub. It’s an atypical approach to theater because we’re so used to having our attention directed, but Kushner and Taccone let it all loose more often than they rein it all in.

Performances are all outstanding (including those from Anthony Fusco as an ex and Robynn Rodriguez as a sort of angel), and though spending time with these people can be exasperating, it’s also highly pleasurable in the way that anything Kushner writes is pleasurable. It’s challenging and rewarding in equal measure. And it’s funny. There’s a scene in the second act (of three, maybe four?) that feels like classic comedy. Everyone’s fighting and shouting – secrets are being revealed right and left, and then we’re treated to a vision that is just about perfect – hilarious but with heft.

I want to tell you that iHo is the next great American family drama, but I can’t say it is. The final act (acts?) have emotional depth and are beautifully performed but aren’t as moving as they should be for such a healthy investment of time. The play feels like it’s heading to a place of epic emotions (beyond the epic arguments) but never quite arrives there.

Even so, iHo is full of those highly charged, emotionally and intellectually complex moments that renew your faith in theater to be as challenging as it is entertaining.

[bonus interview]
I talked to Tony Kushner about iHo for the San Francisco Chronicle. Read the story here.

FOR MORE INFORMATION
Tony Kushner’s The Intelligent Homosexual’s Guide to Capitalism and Socialism with a Key to the Scriptures continues through June 29 in Berkeley Repertory Theatre’s Roda Theatre, 2015 Addison St., Berkeley. Tickets are $29 to $59 (subject to change). Call 510-647-2949 or visit www.berkeleyrep.org.