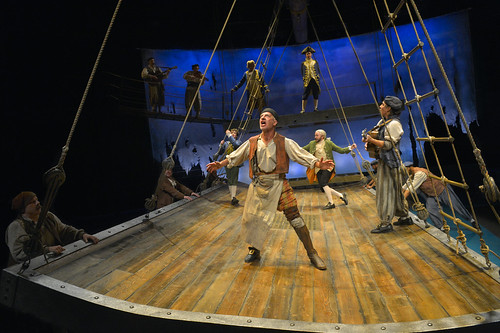 
Mary Zimmerman’s work is consistently thrilling. Since I first saw Journey to the West at Zellerbach Playhouse, I have looked forward to seeing whatever Zimmerman makes next. Luckily, her relationship with Berkeley Reperoty Theatre is such that she keeps coming back and back, always with something intriguing and, quite often, magnificent. Her swimming pool-set Metamorphoses in 1999 (also performed at Zellerbach Playhouse) remains one of my favorite nights in a theater ever.

Zimmerman’s latest offering at Berkeley Rep is a zesty staging of Treasure Island, and it’s a blast. One opening-night patron complained afterward that only boys can like this story, and while I doubt that’s true, I appreciated her one-sentence review: “Too much seamen.”

But that boy’s sense of adventure feeling that burns so brightly in Robert Louis Stevenson’s book is alive and well on stage in the Peet’s Theatre. The score (by Andre Pluess) is gorgeous, with that lively/melancholy contrast that makes seafaring music so distinct, and Zimmerman’s staging, so full of conflict and danger and sailing activity, is a constant delight.

I reviewed the show for the San Francisco Chronicle. Here’s a peek into the Treasure chest:

We’re there in the Admiral Benbow Inn when the truly terrifying Billy Bones (Christopher Donahue) disrupts the lives of young Jim Hawkins (the extraordinary John Babbo) and his mother (Kasey Foster). We’re in the room when the treasure map is unfolded and a plot is hatched to secure a ship and fetch it.
And, most dazzlingly, we’re on the deck of the Hispaniola when Jim and the crew (of mostly pirates just itching to mutiny) head out to sea. The entire set by Todd Rosenthal, with its ropes and riggings, begins to swing. The musicians play, the crew sings, and the look on Jim’s face captures the excitement of anyone whoever loved this book and dreamed about making such an impossible voyage. In one scene, Zimmerman has powerfully captured the joy and danger and fantasy of the Stevenson’s novel. 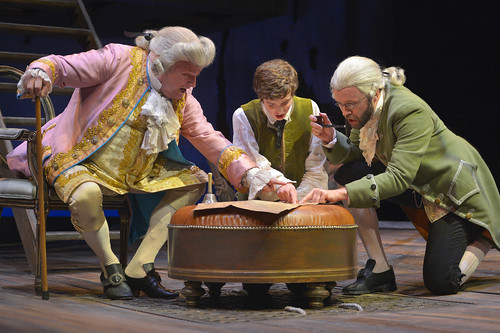 [bonus interview]
I talked to Treasure Island adaptor/director Mary Zimmerman for a feature in the San Francisco Chronicle. Read the story here.