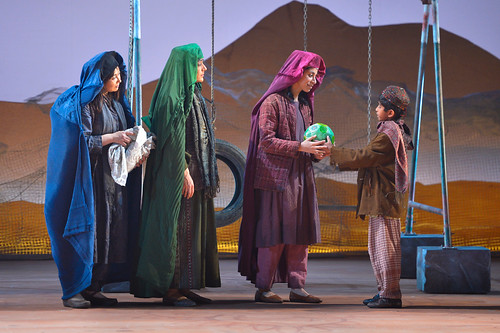 
Let’s be honest: sitting in a beautiful theater watching a well-crafted play is an absolute privilege, so where better to challenge our very notions of privilege and confront the reality that much of the world’s population is having a very different experience than those of us sitting in the velvet seats? With a play like A Thousand Splendid Suns, the world-premiere adaptation of Khaled Hosseini’s 2007 novel now at American Conservatory Theater’s Geary Theater, there are moments when the gilded glory of the Geary melts away and we are totally invested in the story of two women and their family enduring the hardships of life under Taliban rule in Kabul, Afghanistan.

That kind of transference, putting ourselves into the lives of those whose experience is so far from our own, has always been invaluable but suddenly seems like an incredibly important way to interact with a work of art. It’s also a lot of pressure to put on a play, but when Splendid Suns is firing on all theatrical cylinders, it more than lives up to the challenge.

Adapted from the novel by Ursula Rani Sarma and directed by ACT Artistic Director Carey Perloff (in a co-production with Theatre Calgary), the play takes much of its first act to find its legs and its momentum as we learn how the two main characters, Laila (Nadine Malouf) and Mariam (Kate Rigg) forged an enduring friendship amid circumstances involving a devastating bombing, an illegitimate child and a husband not at all averse to the idea of a second wife. 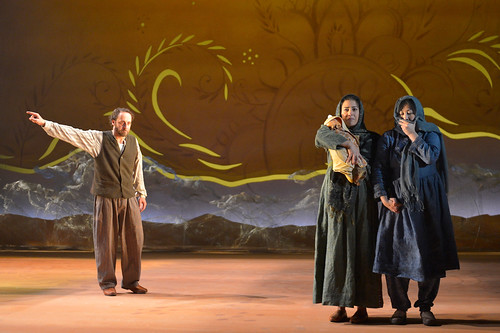 Once Laila and Mariam have forged a loving family in spite of the rage-filled Rasheed (Kaysam Kadri), the story really takes off in Act 2. Laila’s children, daughter Aziza (Nikita Tewani) and son Zalmai (Neel Noronha), are growing up amid much hardship, including the Taliban’s horrific restrictions on women (not allowed to work, not allowed to go to school, not allowed outside the house except in a burqa and in the company of a man, etc.). There’s very little money or food, but there is love. Though the children are Laila’s, they are as much Mariam’s, and the powerful bond they all share is the most palpable thing in the 2 1/2-hour production.

Perloff guides her actors through beautiful, powerful performances. Malouf and Rigg are extraordinarily vivid as Laila and Mariam, and the young actors also make a strong impression. Denmo Ibrahim crackles with vibrancy in a number of small roles, and Kadri as Rasheed, representing the oppression of the patriarchy, still manages to convey a human side to this villain through the love and tenderness he shows his young son.

The stage design by Ken MacDonald conveys an impressionistic view of Kabul that is both beautiful and harsh. There’s spare ornamentation contrasting with barrenness, and the few set pieces conjure intricacy and ruin among the buildings themselves.

The power of this experience is the story itself. Mariam and Laila’s lives – their strength, their devotion, their connection to love despite its scarcity within the confines of their world – could be recounted in an empty space with no flourishes and still be emotionally shattering and inspiring. There’s something larger at work here than simply a play on a stage, and that is a slice of the human experience that illuminates a specific culture while connecting to the better (and worse) parts of our shared humanity. We fear, we lash out, we attempt to control and destroy, but we also connect and empower and create and love ferociously even when that seems an impossible feat.

The play’s (and the novel’s) title comes from Iranian poet Saib Tabrizi, who described the city as “enthralling to the eye”…One could not count the moons that shimmer on her roofs/And the thousand splendid suns that hide behind her walls.” And it’s the “behind her walls” part that is so intriguing. Where there is beauty of where there is desperation, the best of humanity and the worst, there will always be light burning with the intensity of the sun, even if we aren’t able to see it. That is hope, and that is the glowing center of this theatrical experience.