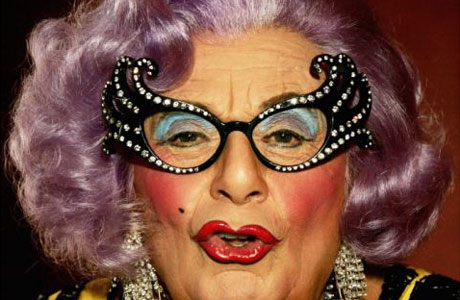 Mega-superstar and truth teller Dame Edna Everage (aka Barry Humphries) is coming back to San Francisco, her spiritual home, and, if the dame is to be believed, the home of her fashion designer son, Kenny, and her lesbian pit bull trainer daughter, Esme.

The International Housewife, Therapist, Gigastar, Fashion Icon, Guru and Swami today proclaimed she will appear at San Francisco’s Post Street Theatre for a limited engagement beginning Nov. 20 and continue through Jan. 4, 2009. Opening Night is set for Nov. 23, 2008. Tickets go on sale today at the Post Street Theatre box office, by phone at 415-771-6900 and on the web at www.ticketmaster.com.

Dame Edna is currently crafting a new and uniquely intimate offering on her private multi-million-acre, possum-infested luxury estate in her native Australia.

All will soon be revealed with Dame Edna – Live and Intimate in Her First Last Tour to her adoring and loyal American audiences. She will display her unique genius with a new and vibrantly stimulating theatrical infrastructure (to use her own vivid phrase), addressing an exciting range of cutting edge comedy solutions.

On making the announcement, Dame Edna said today “I don’t do shows Possums, I make History! In a spooky way I am theater in the making. My shows are really not shows at all, they are not Events; they are MIRACLES which you can proudly tell your grandchildren you witnessed.”

Dame Edna has been revealing her Entertainment Solutions both on Broadway and the length and breadth of America for the last nine years, and never have Americans needed to laugh, cry and give standing ovations as much as they do today. Dame Edna’s performances have won a Tony Award and one Tony Nomination and countless critical awards.

Dame Edna says “I am coming to your hometown with the glorious gift of laughter for a night you will never forget. See you there Possums”

Tickets range in price from $58-$78 for regular performances. All seats for preview performances (November 20 – 22) and Opening Night are $55.

This isn’t a theater item, but I wanted to share with you a superb concert experience I had Tuesday night at the Palace of Fine Arts Theatre, where k.d. lang brought her Watershed tour promoting her new album of the same name.

I’ve see lang a number of times in concert, but I have never seen her so relaxed or in such strong, beautiful voice. She has clearly arrived at a good spot in her life, both personally and professionally. Her confidence and warmth are palpable, and she obviously takes great pride in her new album (on the Nonesuch label), for which she served as producer for the first time. She co-wrote all the songs on the disc, which is her strongest collection of original material since 1992’s Ingenue.

The evening got off to a surprising start with the opening act, solo pianist Dustin O’Halloran, whose offbeat charm set the tone for his lovely keyboard work — sort of a blend of New Age and classical but entirely lacking in pretension.

That mellowed the sold-out crowd quite a bit, though lang’s entrance — barefoot as usual — revved things up. With her five-man band solidly behind her, lang launched into the new album with “Upstream.” She would go on to perform the album in its entirety, and the live versions were even better than the album versions — more lived in, more passionate.

From her previous album, the superb Hymns of the 49th Parallel (easily lang’s best overall album, also on the Nonesuch label), lang sang Neil Young’s “Helpless” and literally brought the house down with Jane Siberry’s haunting and hopeful “The Valley” and Leonard Cohen’s “Hallelujah.” The latter two performances each earned a standing ovation, and though “Hallelujah” verges on the overexposed these days (hello, “American Idol”), lang’s full-throated, dramatic version is the best this side of Jeff Buckley.

With such an impressive back catalogue from which to choose, it was interesting to see what oldies lang would perform. She surprised and deligthed with “Wash Me Clean” from Ingenue, “Western Stars” from Shadowland and “Smoke Dreams” from drag.

Of course she performed her greatest (and only real) hit, “Constant Craving,” but like so many requisite performances, lang has allowed the song to evolve and take on new life while still pleasing the fans.

For her first encore, she used an old-timey microphone and an acoustic setting to perform an early song, the rockabilly “Pay Dirt,” then accompanied herself on the banjo for “Jealous Dog” from the new album. “I’ve recently taken up the banjo,” lang said. “I realized it’s a chick magnet.”

Her final song of the evening, from the new album, was her nod to being a “good Buddhist.” She described “Shadow and the Frame” as an “existentialist lullabye,” and so it is.

The shadow and the frame
so perfectly remain

The shadow and the frame
are indeed the same.”

Here’s a glimpse of lang and the new album: