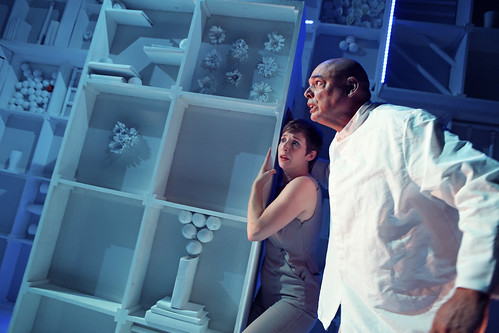 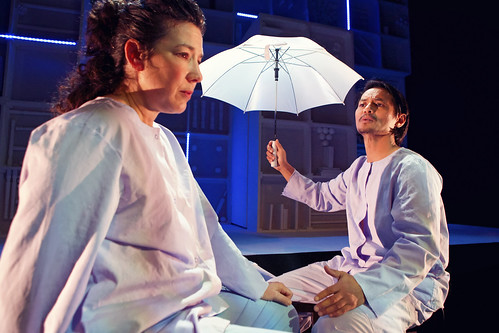 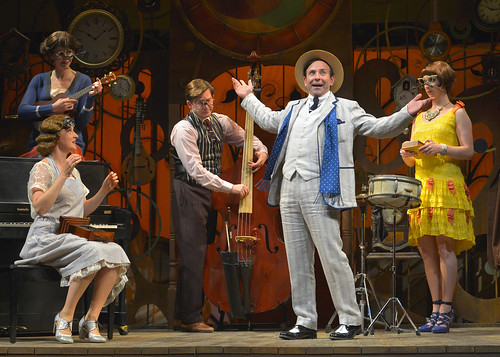 Gertrude Fail (Megan Smith, left) and her clocks (Liz Sklar on ukelele, Patrick Kelly Jones on bass and Kathryn Zdan on kalimba) are surprised by the entrance of the debonair Mortimer Mortimer (Brian Herndon) in the West Coast premiere of Philip Dawkins’ Failure: A Love Story at Marin Theatre Company. Below: Time marches on for the Fail Sisters – Jenny June (Sklar, left), Gertrude (Smith, center) and Nelly (Zdan) – with musical accompaniment from Mortimer Mortimer (Herndon on trombone) and John N. Fail (Jones on snare). Photos by Kevin Bern


Philip Dawkins writes about the inevitable ending of all our stories in Failure: A Love Story, but his version of death is pretty darn upbeat. His beguiling play, now having its West Coast premiere at Marin Theatre Company

, is technically a “play with music,” but there’s a LOT of music, and it’s charmingly played and sung by the five-person cast. I reviewed the play for the San Francisco Chronicle:

Dawkins’ premise seems to be that there’s no such thing as a truly happy ending. We can all live happily ever after – until we die. So what matters is how we live. Why not sing “In the Good Old Summertime” or “Let Me Call You Sweetheart” while we wait?

That’s certainly what the Fail family does. It’s the early part of the 20th century, and Ma and Pa Fail have already succumbed to a terrible accident involving a new DeSoto and the Chicago River, leaving their four children to fend for themselves.

Some 13 years later, it’s 1928, the year we’re told in the show’s crisp narrative style that all three Fail sisters will die. Sounds dark and depressing – it’s anything but. 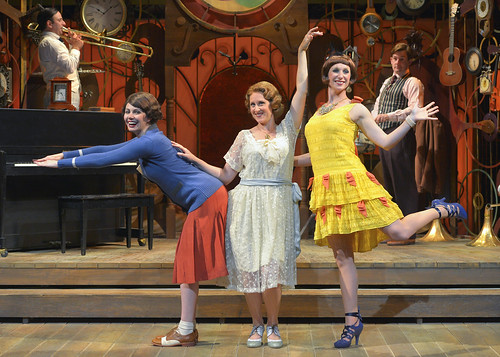 In the world premiere of Lauren Gunderson’s The Taming, the future of America is in the hands of three slightly insane women – a liberal political activist (Marilet Martinez, left), a beauty queen (Kathryn Zdan, center), and a conservative senatorial aid (Marilee Talkington) – who might just be revolutionary geniuses. Below: The Crowded Fire Theater production (with, from left, Martinez, Zdan and Talkington) takes us into a 21st-century hotel room and into late 18th-century America. Photos by Pak Han.


The word “factions” is uttered in a way that makes it sound like the filthiest word you can imagine. And, in these tense government shutdown days, it actually is. But when James Madison says the word, you feel it whistling through the centuries like an airborne bomb that explodes afresh every time political idiocy allows factions (it’s such an easy word to say with loathing) to hijack democracy.

The world premiere of San Francisco playwright Lauren Gunderson’s The Taming couldn’t come at a more volatile time. Our government just happens to be in the middle of a crisis that was anticipated, according to Gunderson’s play, by our founding fathers. The wise Mr. Madison did his best to avert the power of the special interests, but he compromised to keep our fledgling country steady and strong, at least to start.

This vivacious world premiere from Crowded Fire Theater (part of a rolling world premiere with Seattle’s Arts West) couldn’t be more timely. Gunderson, who is pretty much writing every play on Bay Area stages these days (see Shotgun Players, see Marin Theatre Company, see TheatreWorks, see San Francisco Playhouse), has created a satirical comedy that works on its own terms, but she has also crafted a rather ingenious adaptation of Shakespeare’s The Taming of the Shrew, that problematic play that asks a beaten-down, starved woman to say she’s “ashamed women are so foolish.” Gunderson will have none of that, so in her version, she spins Shakespeare’s characters – Katherine, the titular shrew, is now Miss Georgia, a contestant in the Miss America pageant; Bianca, the bratty younger sister of the shrew, is now a lefty-liberal blogger; and Petruchio, the “tamer,” is now a right-wing conservative Republican politico who also happens to be a lesbian – and sets them on a worthwhile task of taming. These ladies, who couldn’t be more different from one another, are asked to combine their passion, their intelligence and their love of country in an effort to tame the U.S. Congress, and while they’re at it, fix the Constitution and the country itself.

The Shrew connection is mostly played for laughs (actual shrews are mentioned often, but it’s in context of the liberal blogger’s quest to keep a species of panda shrews from extinction), with a few sly references here and there until the end, when Gunderson smacks down Shakespeare by kicking a formerly repellent speech (and nearly always repellent Congress) squarely in the ass.

The really nifty trick here is that Gunderson sets up three women we think we know – stereotypes of the beauty queen, the bleeding-heart liberal, the heartless conservative – and lets them surprise us (in good ways and otherwise). It feels great to laugh at smart comedy that cares about the Constitution, about the Founding Fathers’ best intentions, about making long overdue and necessary changes to a country that still has a lot of evolving to do and still has time for broad physical comedy involving a lack of pants.

There are things about this hugely entertaining production that could be sharpened – too many lines get lost in rushed delivery and in the wake of big laughs – but the messiness is part of the appeal. Drugs, sparkly evening wear, sexual tension, kidnapping and scandal are all part of the mix.

And then Gunderson does something wonderful. She takes us to the 1787 Constitutional Convention and lets the 21st-century women play George Washington, James Madison and Charles Cotesworth Pinckney (who voices the powerful opinion of the slavery-loving South and represents one of those factions who threatens to leave the discussion at every hint of not getting exactly what they want). Dolly Madison and Martha Washington make guest appearances, and once we’re back in the hotel room (set by Mikiko Uesugi), we get more zaniness, a satisfying glimpse into a better future and a “dance break for America.”

The happy ending, borne of actual conversation filled with actual dialogue, seems like pure fantasy at this point (alas), but it’s a giddy delight none the less. The Taming has much to offer that is pointed, thought provoking and laugh-out-loud funny, but I cannot get the image of Talkington’s pantyhose out of my head, nor the image of Zdan, all in sparkling blue, shouting, “I am an ambitious American woman in evening wear, and I will not be fucked with!” I’m ready to vote for either woman to do anything.