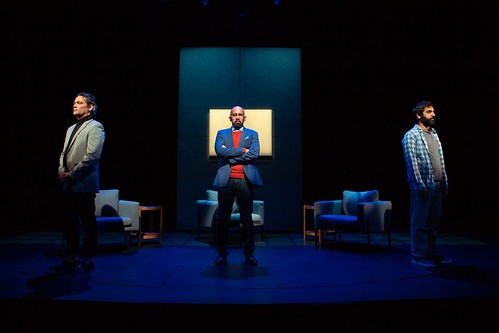 The cast of Art at San Francisco Playhouse features a three-man cast: Serge (Johnny Moreno), Marc (Jomar Tagatac), and Yvan (Bobak Bakhtiari). Below: The dispute over the white painting between Marc, Yvan, and Serge reaches a tipping p oint. Photos by Jessica Palopoli


The Bay Area theater scene has been short on excitement, understandably, these last seven months. So it’s beyond thrilling news when a theater company, in this case San Francisco Playhouse announces a new play on an actual stage with actors acting together on a set that has been designed and lit, with nary a Zoom square to be seen. The only hitch, given this pandemical hellscape in which we find ourselves, is that the production is filmed and shared online. So the actors still can’t hear our laughs, our gasps, our sobs and, perhaps most importantly, our applause.

But, as we’ve all learned, we will happily take what we can get, and this SF Playhouse offering is special and so very welcome – a bold first step back to production. It seems every conceivable precaution has been taken to make it seem as if actors acting on a stage together is an absolutely normal thing (even though we know, in these times, it is absolutely not).

The choice of plays was smart: Bill English, Playhouse co-founder and artistic director, opted for Art by Yasmina Reza (translated by Christopher Hampton), a mid-’90s crowd pleaser that deftly slices apart the very notion of friendship among men under the guise of an argument over an expensive piece of modern art. The play has three actors, and though we see each of the characters’ apartments, the set is less important than the people themselves along with, of course, the large piece of art that is either the work of a great modernist or an almost entirely white canvas that has no more merit than a piece of printer paper.

As director and set designer, English opts to be as theatrical as he can (the center of the set spins wildly when the scene changes) while delivering straightforward performances for the cameras. The result is an artful, angry, absolutely compelling work of Art that loses little in its transition to video. 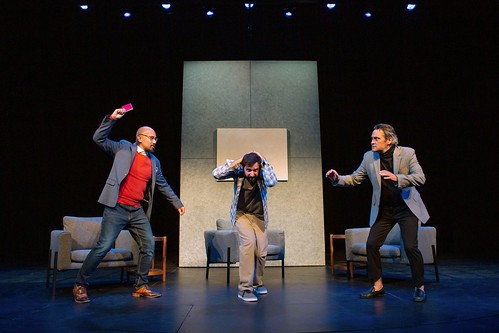 It would appear that the 15-year friendship between Serge (Johnny Moreno), Marc (Jomar Tagatac) and Yvan (Bobak Bakhtiari) is much as it ever was. They are in and out of each other’s lives – though not as often as they used to be – with occasional meals or movies. But how close are they really, and have their friendships evolved and changed along with the men and their lives over those 15 years? That’s the real question, and it’s only after Serge spends $200,000 on a mostly white painting by a supposedly great artist, that fissures in the relationships begin to show and widen.

Marc thinks the painting is utter bullshit and doesn’t hesitate to share that opinion with Serge, who is deeply wounded by his friend’s harsh judgment and closed mind. Each accuses the other of having lost his sense of humor, and that’s when the more hapless Yvan, whose life has not gone well either professionally or romantically, gets sucked into to choose sides.

It’s not long before the feud over the artwork gives way to much deeper issues among the trio of friends, and how you react to their truths, hurts and insults is a lot like a theatrical Rorscharch test. Do you feel sorry for Yvan for being spineless but respect his self-awareness and his reliance on professional help? Do you admire Serge’s intellect and his willingness to embrace something he loves even if it means losing his friends? Or perhaps you side with Marc as we watch illusions about the person he thought he was shatter, and he has to face the harsh truth of middle-aged self.

Playwright Reza gives you ample reason to like or loathe each of these men, and as dark or as pretentious or as pathetic as things get, there’s always darkly satirical humor adding gas to the flames. It’s an especially nice touch when a Roman philosopher becomes a weapon in a funny “projectile Seneca” scene.

The actors attack this spiky material with gusto, and each provides glimpses of both man and monster in his character. It’s interesting to watch their civility deteriorate and revert to something much more primal and more realistically human. Reza softens the ragged, damaging edges of her play with an unnecessary epilogue of sorts, but it’s also kind of nice to leave these characters in an emotionally warmer, more grounded place than we initially found them.

Happily, this Art doesn’t feel like a placeholder until we can gather again. It is a substantial work that satisfies – not as much as it would in person – and helps us feel connected to live theater, even though technically, it’s neither of those things. But it’s close and it’s good and it leaves its hungry audience wanting more.