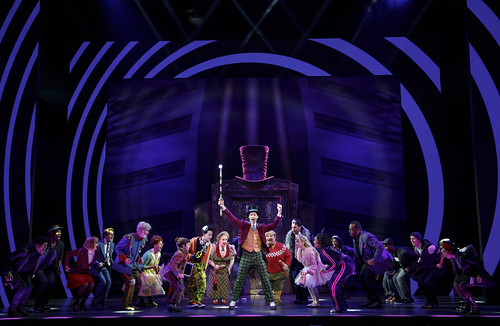 Noah Weisberg (center) is Willy Wonka with the touring company of Roald Dahl’s Charlie and the Chocolate Factory. Below: Wonka leads golden ticket-winners on a tour of his factory. Photos by Joan Marcus


A golden ticket doesn’t buy you much these days – a cut-rate touring musical with chintzy sets, a mediocre score and about as much joy as you’d find in a board meeting about turning wacky movies into boring musicals.

You’d be justified in hoping for more from Charlie and the Chocolate Factory, a new musical re-working of the 1964 novel by Roald Dahl and the 1971 film Willy Wonka and the Chocolate Factory. The show, with a score by Hairspray and “Smash” tunesmiths Marc Shaiman and Scott Wittman, opened in London’s West End in 2013 and had changed drastically (new director, designer and choreographer, more songs from the movie) when it bowed on Broadway four years later. That’s the version now on tour at SHN’s Golden Gate Theatre. It should be fun, funny, dark and wondrous – like the novel and parts of the movie (hello, Gene Wilder as the wonkiest of Wonkas) – but it’s none of those things. More like schematic, uninspired and dull.

I saw the original London production and was profoundly disappointed. Clearly, millions had been spent on elaborate sets and costumes, and Shaiman and Wittman are among my favorite contemporary Broadway composers. But nothing really worked in that production, and I was hopeful that the changes made for Broadway would liven up the property. I was especially intrigued by the notion of replacing all the child actors – except protagonist Charlie Bucket – with adult actors. As the nasty golden ticket-winners tour Wonka’s factory, they get their comeuppance in rather nasty ways, and it was hard finding any joy in watching live children get sucked into chocolate rivers, turned into blueberries and thrown down garbage chutes.

The good news is that it is indeed much funnier watching bad things happen to bad children played in exaggerated ways by adults. The bad news is that’s hardly enough to save this tepid endeavor. The entire first act centers on gathering the group of golden ticket winners who will be the first civilians ever to be allowed inside the marsh-hallowed halls of Wonka’s chocolate factory. There are only five tickets hidden in the wrapping of five Wonka chocolate bars, which means we have to get through five songs introducing each of the winners. Act 1 ends with the kids and their parents about to enter the factory. So basically, Act 1 feels like a looooong prologue. 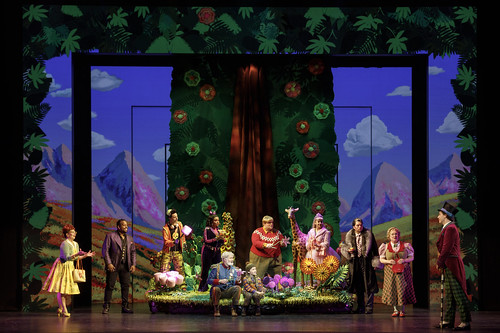 Act 2 is definitely livelier, largely thanks to the half-human/half-puppet Oompa Loompas (puppetry and illusions designed by the great Basil Twist), and even though the underwhelming score doesn’t improve, you find yourself hoping that the wonders of the factory will allow for some stage dazzle. Alas, Mark Thompson’s set is dominated by giant screens, and there’s really nothing wondrous about screens. If we’re going to spend this much time watching screens, we might as well just watch the movie again.

There’s not a lot the actors can do with this material, but they do their best. Noah Weisberg is a game but unremarkable Wonka who is forced to spend the first act pretending to run a small candy shop in the slum Charlie and his desperately impoverished family call home. At Wednesday’s opening-night performance, Charlie was played by Henry Boshart (who shares the role with Collin Jeffery and Rueby Wood) in a bright and friendly fashion. It’s too bad that the moment when Charlie finds his golden ticket is such a massive let down. Director Jack O’Brien hardly allows for a beat to transpire before the event happens and is gone.

Other than the songs from the movie – notably “The Candy Man,” “Pure Imagination” and “The Oompa Loompa Song” – nothing in the Shaiman/Wittman score sticks. The Act 1 closer, “It Must Be Believed to Be Seen,” will likely go down as one of the worst act closers in Broadway history. And the ballad for Charlie’s mom (played with winsome loveliness by Amanda Rose), “That Little Man of Mine,” showcases the gross sentimentality that plagues so many of the new songs.

This whole show is such a missed opportunity. There’s enough here for families to have a reasonably enjoyable theater experience, but it would be so much better if kids got to experience something truly magical on stage. What this show feels like is a multimedia conglomerate wanting to maximize a property with minimal creative license. This Charlie and the Chocolate Factory is a great glass elevator ride to nowhere.

Brooklynn Pulver (above center) is Tracy Turnblad in the touring production of Hairspray. Photo by Phil Martin

Last summer, it was yet another musical breathing new life into the revival of movie musicals.

This summer, it’s an actual, three-dimensional live musical happening before your very eyes.

Hairspray, one of the happiest musicals around, is returning to the Bay Area. The show — described as “Broadway’s big fat musical comedy hit” — will play San Francisco’s Orpheum Theatre June 10 through 22.

This tour — the same one that was in Cupertino in February — is based on Jack O’Brien’s original direction and Jerry Mitchell’s original choreography, recreated, respectively, by Matt Lenz and Danny James Austin.

Sorry to report that John Travolta, Michelle Pfeiffer, Queen Latifah and Zac Efron are unavailable for the tour and will, for the moment, confine their performances to the silver screen. But wouldn’t it be fun to see if they could do it as well LIVE?