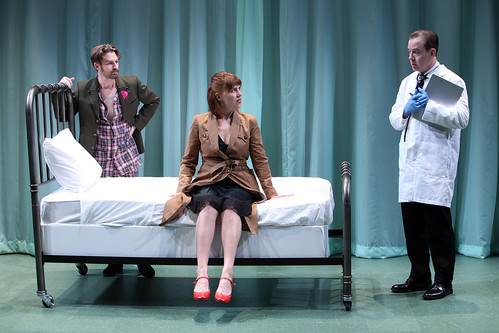 The cast of Paula Vogel’s The Baltimore Waltz at Magic Theatre includes (from left) Patrick Alparone as Carl, Lauren English as Anna and Greg Jackson as The Third Man. Below: Alparone’s Carl and English’s Anna spend some quality time in Paris. Photos by Jennifer Reiley


Any of us would be lucky – beyond lucky – to be as loved as Paula Vogel’s brother Carl. The Pulitzer Prize-winning playwright (who, after nearly 50 years as one of the country’s preeminent playwrights, will see her first Broadway opening next month with Indecent) wrote The Baltimore Waltz a year after Carl died of complications from AIDS. This is her tribute to him, a love letter from sister to brother, but she accomplishes this with such offbeat originality, whimsy and heart that there’s no room for sentimentality or feeble clichés about love and loss.

Celebrating its 50th anniversary, Magic Theatre has revived The Baltimore Waltz 25 years after hosting its West Coast premiere. Under the direction of Jonathan Moscone the plays still feels fresh and vital, and while its roots are firmly in the plague years, its fancifully clever and sound construction give it a timeless sense. There’s no expiration date for the love of a sibling or the depthless grief of losing that sibling.

When Vogel’s brother invited her on a trip to Europe, she had neither the time nor the money to make it happen. Here’s something else she didn’t have: the knowledge that he was HIV-positive and that within two years, he would be gone. From his hospital bed at Johns Hopkins in 1987, Carl wrote his sister a letter (which she invites theaters to publish in their programs) detailing his funeral arrangements. “Oh God – I can hear you groaning – everybody wants to direct,” Carl wrote. “Well, I want a good show, even though my role has been reduced involuntarily from player to prop.” That spark, that humor – they’re alive and well in Vogel’s rich 90-minute play, and she has given her brother what he wanted and more. She has written him a great show.

In perhaps the play’s most inspiring and heartbreaking conceit, Vogel gives her character the fatal disease. In this alternate reality, Anna (the Vogel stand-in played by Lauren English) is a Baltimore schoolteacher who sat on an infected toilet seat at school and contracted ATD – Acquired Toilet Disease. She hasn’t got long, so her older brother, Carl (Patrick Alparone) wants to take her to Europe. The trip would be for fun and to see a doctor in Vienna with a promising treatment. Even though she has a fear of not speaking any other languages, Anna agrees, and she and Carl head to France, the Netherlands, Germany and Austria, where everyone they meet – from doctors to the Little Dutch Boy to student activists – are played by the remarkably versatile Greg Jackson as a character referred to in the program as “the Third Man” (references to the 1949 movie abound). 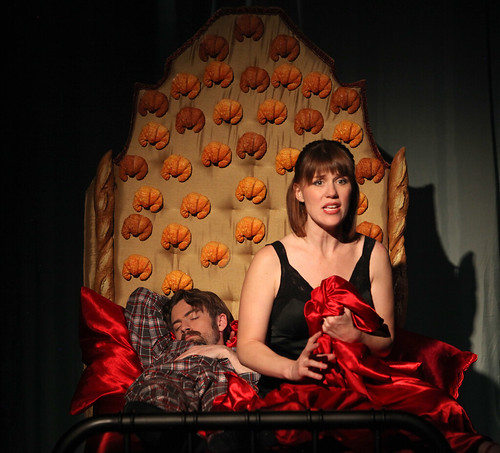 We know this is an alternate reality in several ways, but the most elegant is the set (designed by Nina Ball and lit by Heather Gilbert), which replicates a hospital room filled with flimsy curtains to separate the beds. There are harsh fluorescent lights for the more clinical moments, but mostly we’re in a dreamy wash of light and shadow and dances under a mirror ball. In the clothing department (costumes by Meg Neville) Carl wears pajamas and a sport coat (pink triangle on the lapel) and Anna wears a negligee and an overcoat – not your usual ensembles for international travel.

Throughout the play’s fragmented scenes, Carl clings to a stuffed rabbit throughout the trip but hastily hands it over to Anna when going through airport security or border crossings. Just what’s in the bunny remains a mystery, but Carl clings to the toy as if it were his soul, his sexuality, his comfort. He connects with other men carrying bunnies, and yet the minute his bunny is taken from him, the fantasy of the play begins to give way to reality.

For much of its running time, this is a fun and funny play about dying but with shadows lurking to darken the comedy. Vogel and director Moscone never let us forget what is really happening here. English as Anna is relatable and comic without being silly. Anna has been diagnosed with a fatal disease, she’s visiting Europe for the first time with the human she treasures most in the world, and she seizes the opportunity to live, to have lots of sex, to open her ears to new words and conditional tenses, to eat new foods and to love her brother.

Alparone has an edgy sort of charm that keeps Carl as prickly as he is passionate, as enigmatic as he is loving. He and English pair effectively as siblings who can clash and squabble but never question their inexorable bond. There’s an easy flow to Moscone’s production, where it seems every detail has been attended to, from the actual waltzes that dot the play to Anna’s red strap shoes to the croissants that dot the headboard in a Paris hotel.

Reality catches up with Anna and Carl eventually, and the shift from fragmented fantasy to the starkness of real life could, in less capable hands, be jarring. Here it is simply moving and, like the play itself, a thing of beauty that leaves the theater with you.