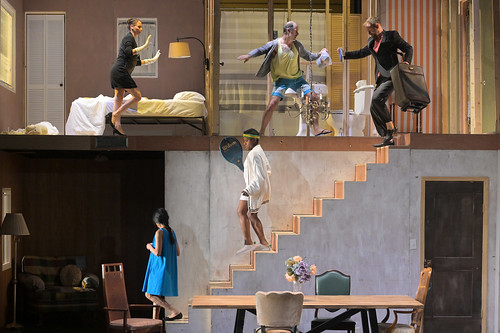 
What Dorothy Gale said is true: there’s no place like home. But in this particular instance, there is no place and no show quite like HOME, the creation of the marvelous Geoff Sobelle, whom we last saw rummaging through boxes and file cabinets on stage at the Curran in The Object Lesson (read my review here). Sobelle is back with another inventive, wholly unique theater piece, this time at Berkeley Repertory Theatre, where he and a mighty crew of designers and actors are homing in on the lives we lead.

I’ve never seen anything quite like HOME, a mostly wordless one-act (about 105 minutes) that combines magic tricks, dance (let’s call it highly choreographed movement by David Neumann), vaudeville comedy, serious exploration of day-to-day humanity and more audience interactivity than I’ve ever experienced in a theater. At one point in the second half of the show, it felt like a good third of the Roda Theatre audience was on stage participating in the show, all looking and acting like they were hired actors doing all kinds of things from the simple act of celebrating and drinking wine to being costumed for a wedding to fighting with a “spouse” to the more demanding job of narrating a description of a personal dwelling into a microphone.

But that’s all part of the giant metaphor of theater being a certain kind of home in and of itself. The auditorium of a theater is often referred to as “the house,” and we theater fans are temporary dwellers in that house for the specific purpose of having a concentrated life experience alongside our fellow dwellers. The experience of HOME – and it is more of an experience than an actual play – is to provide a framework around the notion of what home means to us and partially fill it with some theatrical dazzle, some group revelry and songs. The singer/songwriter Elvis Perkins (interesting side note: he’s the son of actor Anthony Perkins and photographer Berry Berenson) is the troubadour for the evening, floating through the house in a wide-brimmed hat singing original tunes and playing guitar, autoharp, ukulele and harmonica. Why? Why not! 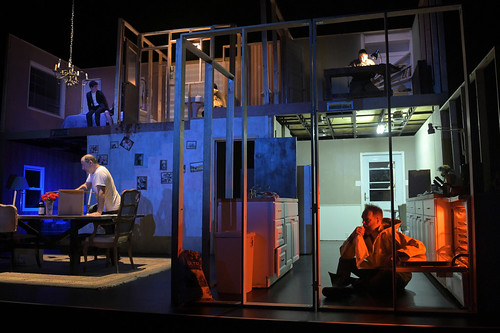 In addition to Perkins, there’s abundant music floating through this dwelling. A small brass band materializes at one point, and the sound design (by Brandon Wolcott) includes some memorable tango moments to underscore the push and pull of the inhabitants as they live their complicatedly simple lives and go through their daily ablutions.

Perhaps the most memorable sequence involves the morning routine, as inhabitants roll out of bed, into the bathroom and then into the kitchen. The core cast of six makes it seem like dozens of people are flowing out of a bed (lots of actual magic tricks, sorry, illusions at work here designed by Steve Cuiffo) and into the tiny second-floor bathroom, where comedy and nudity blend into a grown-up clown show. From there, the action moves downstairs into the kitchen for juice and coffee and then off into the day. It’s all the humor of recognition, but elevated to high art under the astute direction of Lee Sunday Evans.

Aside from the actual tricks, there’s some real magic to this show. We all have a relationship to home, be it the one we’re from or the one we live in, and HOME leaves us plenty of room to fill in the blanks, even if there isn’t really a story or fully formed characters. This is a show that can simply be entertaining and interesting (hugely so on both counts) or as deeply meaningful as we might want it to be. There’s a life cycle to the home here, from the opening moments when Sobelle begins putting up walls to create the home to the closing moments, when the building has reached the end of its usefulness. The house is the primary character here, and as such, its design by Steven Dufala is ingenious. We are allowed to witness all the important moments of this structure’s life. We even get to experience that moment when it goes from construction site to actual home (flowers on the table, water in the sink, sheets on the bed). We experience rousing celebrations and the darkness that can creep into mundanity (all beautifully lit by Christopher Kuhl).

As a kind of a house, a theater is constantly filled with dreams made real, and the house in HOME is indeed dreamy, full of that transient joy and sorrow, those beginnings and endings that demarcate our lives. That’s either quite ordinary or quite profound. In HOME Sobelle allows it to be both, the constant flux of life under a roof, self-contained yet impossible to hold. 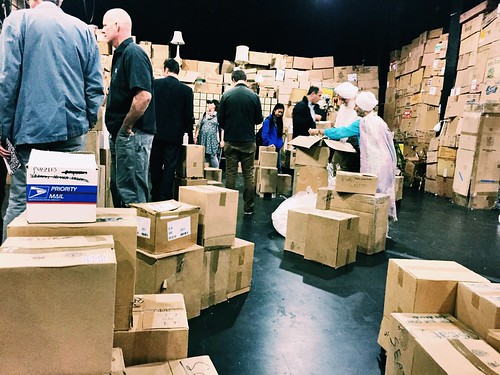 The audience mills about the stage of the Curran Theatre, looking into the boxes comprising the set for Geoff Sobelle’s The Object Lesson, a solo show about stuff and time and life. Below: Stuff, stuff and more stuff. Inside one of the boxes and Sobelle sets up at the beginning of the show.


You’d think, from the piles and walls of boxes that fill the stage of the Curran Theatre, that Geoff Sobelle’s object here would involve shame – shame that we’re so attached to our stuff and that we accumulate so much stuff and that being burdened by SO MUCH STUFF would be about the worst thing there is.

But that’s not really the case. The experience does kind of make you want to go through some old boxes and maybe do some judicious pruning to the stuff collection, but the overall feeling is one of affection for our stuff because, as junky and fire hazard-y as it might be, it’s ours, and as such, filled with memories, traumas, joys, mysteries, connections lost and found. In short, it’s all the physical manifestations of our innards, however you want to define that (soul, psyche, spirit, psychosis). 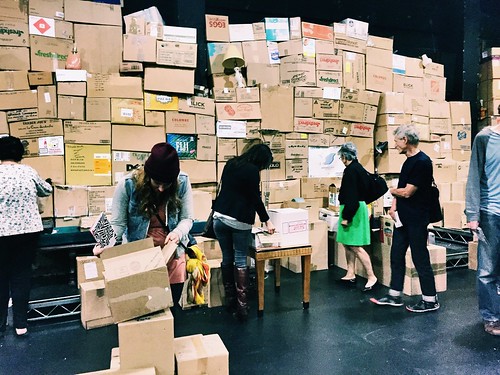 Audiences members are encouraged to get to the theater early so they can immerse themselves in the world of the play (which, as are all Curran: Under Construction events, held entirely on the stage of the venerable San Francisco theater). Designer Steven Dufala has stuffed the space with piles and towers of boxes, and they’re filled – at least all those within reach – with objects, notes and enigmas. We are encouraged to dive in and explore. One box I opened, labeled “balloons,” had inflated red balloons as well as several hot-air balloon-themed wind chimes. Another box was filled only with instructions, that I was to find someone who wanted to share a secret with and tell them with a smile, “I believe this is just for you.” Another box was filled with boots and photographs. 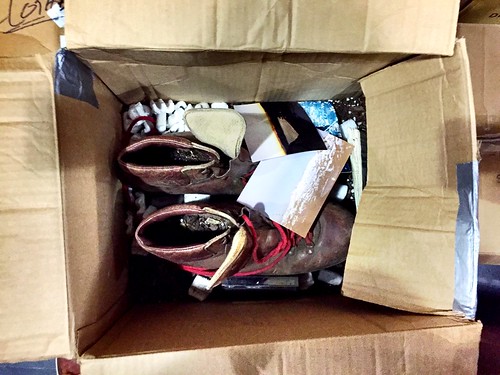 People really get into the poking about, finding masks and taking selfies wile trying them on, discovering a mini-disc player and grooving to the tunes it happens to be playing and just enjoying the thrill of going through other people’s things.

Creator/performer Sobelle, who launched this show at the Edinburgh Fringe last year before taking it to New York, emerges into the crowd and begins emptying boxes and creating a set for himself – green chair, busted (but functional) lamps, an end table and a dial telephone, a fake plant, a turntable playing David Byrne’s “Glass, Concrete and Stone,” a gramophone – while the audience finds a seat on one of the sturdy cardboard boxes marked “seat.” 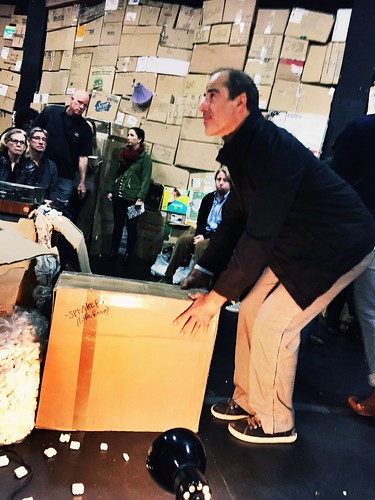 Once his little nest is settled, the lights go down, and the 90-ish-minute show begins. The first chapter involves Sobelle ranting into a little tape recorder and then, cleverly, receiving counsel via the telephone from the recording he has just made. He then shifts to the edge of the stage, where the closed curtain conceals the auditorium, but the curtain doesn’t remain closed for long, and sure enough, the auditorium, especially the mezzanine, is also filled with boxes.

Sobelle muses on the past and the greatest week of his life living and working in the French countryside. His story is punctuated by discoveries from the boxes, including some goat cheese, a baguette and a bottle of wine, all of which are generously shared with the audience. A trek into the mezzanine to retrieve a beloved memento is nothing short of enchanting.

After some interaction with audience members who narrate the contents of their pockets and purses, Sobelle launches into a clown section of the show that reminded me of Bill Irwin and David Shiner and the kind of thing they might do in Fool Moon. Wearing ice skates, Sobelle chooses an audience member (a young woman named Kelly at Thursday night’s show) and woos her with wine and a salad. He makes the salad on a tabletop, shredding the lettuce and chopping the carrots with his ice skates. He also does an impressive amount of dancing on the tabletop in said skates.

The final act involves a magic trick, or an illusion really, akin to the bottomless carpetbag Mary Poppins uses to dazzle the Banks children. But Sobelle’s mostly wordless version is a lyrical musing on life, from youth and work and dating to parenting to retirement and death. It’s absolutely extraordinary, beautiful even, and I was a little sorry when the show reached its inevitable end. It gets kind of cozy there among all those boxes, with audience members playing along, scurrying out of the way when Sobelle needs the space for his act and quickly settling into a new space.

It seems so simple, the idea of musing about life and stuff amid so much stuff, but this artful creation is carefully calibrated and impeccably designed (directed by David Neumann, lit by Christopher Kuhl, sound designed by Nick Kourtides) so as not to seem overly designed, but spontaneous and random. But isn’t that life – seemingly so chaotic and overstuffed and yet with so much, especially the end, that is absolutely certain.

FOR MORE INFORMATION
Geoff Sobelle’s The Object Lesson continues through Oct. 18 as part of the Curran: Under Construction series at the Curran Theatre, 445 Geary St., San Francisco. Tickets are $25-$50. Visit www.sfcurran.com.