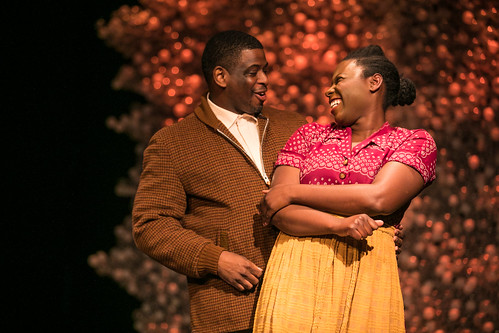 Day and Henrietta Lacks (Khary Moye and Jeunée Simon) in happier days before Henrietta’s illness in the TheatreFirst world premiere of Lauren Gunderson and Geetha Reddy’s HeLa at Berkeley’s Black Oak Theatre. Below: A scientist (Akemi Okamura) comes to the home of Deborah (Desiree Rogers) and only wants a little bit of blood. Photos by Cheshire Isaacs


For decades, hardly anyone knew the origin of the HeLa cancer cells that were being used to study cancer, cure polio, research AIDS and function in any number of vital scientific projects. All they knew about this “immortal” line of cells is that they reproduced quickly and were invaluable components of scientific progress. They did not know that the original cells, which have generated some 20 tons of cells for research purposes, were taken without the consent (or knowledge) of the terminally ill woman in whose body they resided: Henrietta Lacks.

Chances are good that, unlike so many scientists for so many years, you have heard of Henrietta Lacks, whether from Rebecca Skloots’ best-selling book The Immortal Life of Henrietta Lacks or, more recently, the HBO movie based on the book starring Oprah Winfrey as Lacks’ daughter Deborah. The story continues to be told, this time for the stage, in the world premiere play from TheatreFirst: HeLa by Bay Area playwrights Lauren Gunderson and Geetha Reddy.

There are so many ways you can go with this story: heavy family drama, intense scientific victory, yet another chapter in the exploitation of African Americans. Gunderson and Reddy’s HeLa, named for the history-erasing name given to Lacks’ cells, goes in all of those directions, but does so in an expedient way that somehow even manages, amid the sadness and anger, to find some lightness and depth.

Perhaps the most powerful aspect of this nearly 70-minute one-act is the almost effortless way it makes Lacks’ story part of the epic African-American struggle. “We live on a history of taking,” one character says, and that taking extends from human beings taken from their native land, sold and enslaved to cells from Lacks’ cancer-ridden body taken, studied and regenerated for decades (to the present day) to the tune of billions of dollars while Henrietta’s family members – the husband and five children she left behind and then her grandchildren and great grandchildren – struggled to afford their own healthcare. 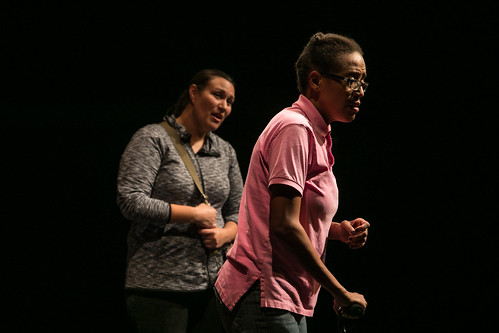 That notion of taking resonates throughout this short play, which weaves a thorough portrait of Lacks and her legacy, its issues and its triumphs, without being weighted down by too many details, either biographical or scientific, though there are plenty of both.

At the start, director Evren Odcikin’s energetic production feels like it could be veering into Hallmark Channel sweetness as we meet the Lacks family. But that slow dance in front of a sink full of dishes is short-lived, as Henrietta quickly succumbs to cervical cancer, though her presence continues to dominate the play through a warm, passionate portrayal by Jeunée Simon. Where Henrietta’s cells go, the spirit of Henrietta follows, sometimes to comic effect, as when she and her petri dish accompany a canine cosmonaut (played by ensemble member Sarah Mitchell) on a space research mission.

Odcikin moves his adept cast around the small stage with verve and efficiency, as years tumble by and we begin to comprehend the vastness of the research and scientific accomplishment achieved thanks to Henrietta and the HeLa cells. But then comes the emotional weight borne by her family when they begin to learn what became of Henrietta’s cells and how they – and in a way her – have become immortal (and made certain people rich in the process).

The family’s emotional connection to Henrietta and the legacy to which she was only able to contribute her physical matter is embodied in a grounded, complex performance by Desiree Rogers as Deborah, one of the five Lacks children. We get to age with Deborah, from a little girl at her mother’s feet to a grandmother, and we feel the absence of a mother in her life and the perplexing, wrenching and unexpected return of that mother in the form of millions of cells in a lab.

Except for an attractive and intriguing backdrop (by Bailey Hikawa) that resembles a giant mass of bubble-like cells that effectively catch the lighting design by Stephanie Anne Johnson, the stage is bare of anything other than actors – most playing multiple roles – and a few chairs. Khary Moye is Henrietta’s husband, Day, and Richard Pallaziol is the doctor who has to tell Henrietta she’s dying, but then in an unsettling monologue, is able to reach into the future and discuss the ways she will be exploited without her ever knowing it. In later years, Akemi Okamura is a young scientist who needs to extract blood (just a little!) from the family and unwittingly reveals Henrietta’s involvement in the science community for the past two decades.

There’s a cumulative power to this story that feels both intimate and epic, another chapter in our history of taking that tells an essential story that should keep being told.