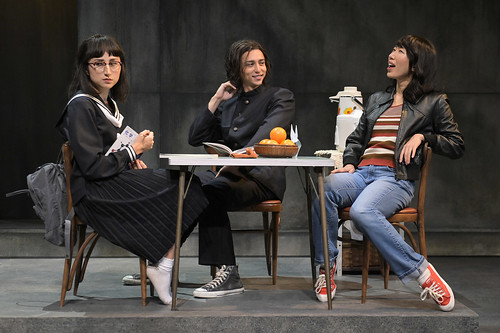 For three hours, the play aims to depict the effect of the political on the personal and the personal on the political, and at its most successful, it conveys a powerful sense of how ferocious, tenacious and depthless the love of a mother can be. But for much of its running time, The Great Wave is superficial and performed with a surprisingly topsy-turvy level of conviction by its cast.

Director Mark Wing-Davey layers an intricate sound design (by Bray Poor) and an even more intricate projection design (by Tara Knight) onto the play in a way that makes it seem he doesn’t fully trust Turnly or the actors enough to convey the emotional weight of the show. And he may be right.

The play’s first act feels like a proloooooonged prologue in which a young Japanese woman disappears from a beach during a storm under mysterious circumstances. The mystery is solved – for us not her family – very shortly when we learn the woman, Hanako (Jo Mei) was abducted by operatives from North Korea along with more than a dozen other Japanese citizens in a diabolical plot (based on a true story!) to train North Korean terrorists to effectively infiltrate South Korea posing as Japanese visitors. 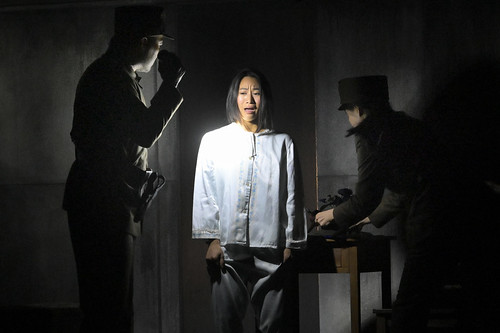 In Hanako’s case, she is training a Korean woman named Jung Sun (the excellent Cindy Im) all the while being brainwashed into the North Korean way of complete and total abasement and lack of individuality at the feat of the Great Leader, Kim Il-Sung. Meanwhile, back in Japan, Hanako’s mom (Sharon Omi), sister (Yurié Collins) and friend (Julian Cihi) somehow know that she’s still alive and work feverishly to get the attention of their government officials, who mostly look the other way.

This is one of those plays where words drift across the stage along the lines of “six years later” or “two years later,” and each time that happens, it feels like any dramatic momentum the play had dissipates. Act 2 gains more traction as Hanako’s family comes closer to finding her and Hanako herself is faced with some difficult choices involving the life she came from, the life she’s living now with a government-ordered husband (Stephen Hu), a daughter (Grace Chan Ng) and a country in famine.

Though Hanako’s life in Korea seems to evolve over the 25 years, the lives of her family seem to exist only in service to finding her, and as such feel dramatically inert. There’s a parade of time-going-by wigs along with an attempt at a love story, but mother, sister and friend simply aren’t interesting enough to inspire our investment in their emotional lives or their complete devotion to finding Hanako.

It certainly doesn’t’ help that the opening-night performance was rough. The set malfunctioned noisily at one point, and actors seemed in need of more rehearsal (one two-person scene veered noticeably off the rails with muddled dialogue and sound effect cues).

The Great Wave is fitfully engaging, but its most potentially most rewarding moments are drained of dramatic impact or cut off much too quickly. There’s a big story to tell here, but this is is a Wave that definitely spends too much time splashing in the shallows.