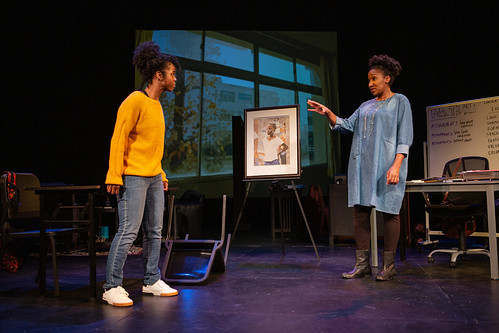 Davis (Jamella Cross, left) explains herself to Ms. T. (Safiya Fredericks) after an altercation in the classroom in [hieroglyph], a co-production of San Francisco Playhouse and Lorraine Hansberry Theatre streaming through April 3. Below: Davis explains the meaning of her artwork to her father Ernest (Khary L. Moye). Photos by Jessica Palopoli


No play can address all the ills of society, but a well-told family story that digs into the lives and psyches of human beings doing their best to get from day to day can reveal a whole lot about where we’ve gone wrong or (occasionally) where we get something right.

Erika Dickerson-Despenza’s [hieroglyph], about a Black family navigating intense trauma, is one of those plays that feels small – only four characters – but grows into something epic on an emotional level. This streaming co-production of the San Francisco Playhouse and the Lorraine Hansberry Theatre, and directed by the Hansberry’s new artistic director, revered Bay Area actor/director Margo Hall, is one of the most effective pandemic productions I’ve seen. It also carries on the Playhouse’s remarkable effort to continue staging productions (safely) and sharing them online.

On a revolving set by Bill English, beautifully lit by Kevin Myrick and with projections by Teddy Hulsker, the world of the characters is clear, and so as the play reveals itself, is their damage. And their strength, individually and collectively, and their hearts.

Davis is an extremely bright 13-year-old. Her family lost everything in Hurricane Katrina, and after having been relocated temporarily to the nightmare of the Superdome, she and her father have been relocated to Chicago. Amid all that drama, her mother and father have separated, she’s starting a new school mid-term in a city and culture that couldn’t be more different from New Orleans and she’s bearing the weight of something she cannot talk about. 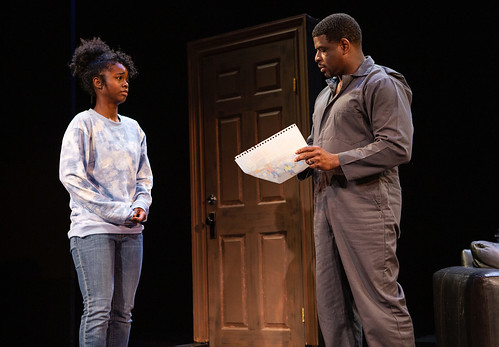 But she can express some of her inner turmoil through her art, and her new art teacher is one of those extraordinary educators who makes a difference in the lives of her students in a number of ways. Ms. T (Safiya Fredericks) is a sharply intelligent, complex and fascinating woman attempting to live her life kaleidoscopically rather than monochromatically. She wants to pass that multifarious approach on to her students through their study and practice of art (notably, in the play, through the work by Black artist Ernest Crichlow and his dimensional approach to depicting Black women). It’s not difficult to extrapolate here that playwright Dickerson-Despenza values art (paintings, plays, etc.) as a means through which we can understand life and each other more fully and more honestly.

Ms. T, whose own past trauma still reverberates through her life, connects with Davis (an extraordinary Jamella Cross), and though that connection is a lifeline, Davis is barely coping. Her father, Ernest (Khary L. Moye), has found work as a custodian in a museum and is doing his best to be there for his daughter. But he has issues of his own, not the least of which is a ruptured marriage and the traps of his own upbringing. Davis makes a friend in classmate Leah (Anna Maria Sharpe), a spirited young woman who attempts to provide an education in the subject of teenagers on Chicago’s West Side.

Even though difficult things grow more difficult in this world, Dickerson-Despenza still makes room for currents of love and moments of happiness to course through the drama, whether it’s Davis and Ernest acting out a playful father-daughter ritual or Davis and Leah practicing their dance moves before heading to a juke party. But this is a heavy story – how could it not be when its characters are facing natural and man-made disasters, sexual assault, displacement, PTSD and fractured relationships? There are no easy answers or conclusions here, just various forms of injury, strength, coping and confrontation.

At only about 90 minutes, [hieroglyph] (which refers to an actual symbol that surfaces in Davis’ artwork) is intense and demanding. Even though this is a well-filmed play, it still feels very much like a play, with the scene changes included rather than edited out, and that makes it even more satisfying. Hall and her excellent cast find depth and warmth and genuine emotion in these characters, which makes their pain all the more impactful on the audience. There aren’t superlatives big enough for the work done here by Cross as Davis and Fredericks as Ms. T.

If it seems that spending any amount of time – even 90 minutes – exploring pain, trauma and crisis is a lot to deal with on top of a world situation involving pain, trauma and crisis, consider this: Dickerson-Despenza is a talented playwright who infuses poetry into her drama. She is compassionate toward her characters, even when she’s brutally honest. And she’s shining a light – made all the brighter when you care about the people it touches, as you do here – on important aspects of history as it really happened (no matter what the people in charge say), on what life in this country is really like for Black people and on the roots of horrible crimes terrorizing Black girls and women that must be examined and obliterated. [hieroglyph] has the undeniable power of truth experienced through the prism of inspired art.

FOR MORE INFORMATION
Erika Dickerson-Despenza’s [hieroglyph] streams through April 13. Tickets are $15-$100 from Lorraine Hansberry Theatre at lhtsf.org or from San Francisco Playhouse at sfplayhouse.org or by calling 415-677-9596.