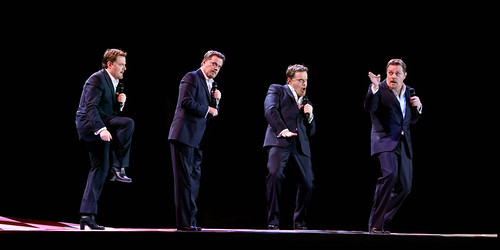 
Eddie Izzard was back in town this week with his Force Majeure tour. His San Francisco stop at the Golden Gate Theatre offered congratulations to audience members for being the smartest audiences in town (because they were there, naturally), and allowed fans the opportunity to offer depthless adoration to Izzard, the queenly king of the non-sequitur.

I reviewed Force Majeure for the San Francisco Chronicle.

You don’t go to an Izzard show for jokes you get to re-tell at work the next day. An Izzard ramble can begin with Oliver Cromwell, jog over to humanity going backward (“Take note, Tea Party,” Izzard said. “Here we are marching backward for Jesus.”), dive into the Emperor Constantine streamlining the pantheon of gods and end with Buddha, enjoying a delicious Indian meal and telling his followers that every time a gong sounds, a Buddhist angel gets its wings. We know this, he says, from the movie, “It’s a Wonderful Life This Time Around.”

I also interviewed Izzard prior to his arrival in the Bay Area. Here’s a taste.

If Izzard is sounding like an optimist, there’s a reason. In five years, he’s going to do his part in making the world a better place by going into politics. He remains resolute in his decision to run for mayor of London or become a member of Parliament in 2020.
“I’m inspired by Sen. Al Franken,” Izzard says, referring to the comedian turned Democratic senator from Minnesota. “He initially won by something like 312 votes and six years later by 200,000 votes. He’s a workhorse, not a show horse. He has been good for his state, good for his country.”
In the most recent British election, Izzard campaigned in 62 constituencies for the Labour Party, but the election did not go his way. “It’s not good to be on the wrong side of that,” he says. “But you have to learn from whatever happens, however people vote. I know I’m trying to do a good job on my end.” 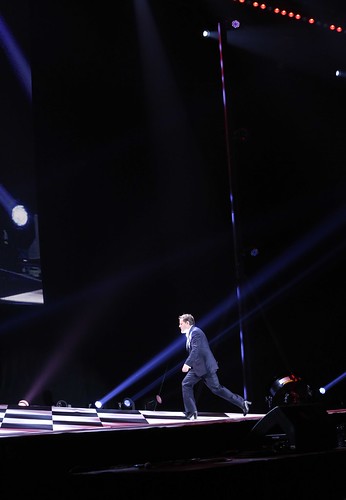 I need to get the embarrassing details out there here at the start: The first versions of Beatles songs I ever grew to love were – gulp – on the double-album soundtrack of Sgt. Pepper’s Lonely Hearts Club Band, the 1978 disaster starring Peter Frampton, the Bee Gees, Steve Martin, George Burns, Aerosmith and Earth, Wind & Fire.

Eventually I came to my senses (ie, I grew up) and heard the Beatles’ “Maxwell’s Silver Hammer” and actually enjoyed it more than Steve Martin’s.

Which brings me to my current fascination: the movie musical Across the Universe.

This is a safe space to talk about musicals, of course, but there is some real theater cred at work here in the person of director Julie Taymor, the Tony Award-winning director of Disney’s The Lion King.

In case you don’t know what Across the Universe is, it’s the story of the 1960s, from the carefree early days (the last vestiges of the fabulous ‘50s) to the war-torn, protest-filled, assassination-laden end of the decade. And it’s all told using Beatles songs sung by the actors.

Think of Grease, Hair, Tommy (and even High School Musical comes to mind in a gymnasium scene involving basketballs) and Moulin Rouge and you’ll begin to get Taymor’s fantastical approach.

I loved this movie. I’ve seen it twice and fallen hard for the soundtrack (the complete double-disc version on iTunes rather than the abbreviated single-disc version on store shelves). You either get on board for this and let Taymor and her cohorts dazzle your mind and heart or you just sit there thinking: This is stupid. Give me my Beatles CDs and I’ll just slit my wrists now.

Clearly I was in the former category. It’s hard not to dig a movie that recasts “I Wanna Hold Your Hand” as a lesbian cheerleader’s heart-rending ballad directed to a fellow cheerleader. T.V. Carpio is the actress playing the role, and she’s fabulous.

So is Evan Rachel Wood as Lucy and Jim Sturgess as Jude, the young lovers – she from upper middle-class America, he from lower working-class Liverpool – caught up in the changing tides of the storm-tossed decade. Both sing beautifully (she’s got a sweet vibrato, and he sounds like Ewan MacGregor).

The best scenes are the most theatrical: Sturgess singing “I’ve Just Seen a Face” (a truly fabulous song I didn’t previously know, which gives me renewed interest in exploring the ENTIRE Beatles back catalogue) in a bowling alley. In terms of movie musical bowling alley scenes, it’s much better than “Score Tonight” from Grease 2.

Other highlights include a frat-boyish “With a Little Help from My Friends,” a dynamic “I Want You/She’s So Heavy” with some great dancing and masks (with Taymor, of course there are masks) and a soul-stirring gospel “Let It Be” that takes place during the Detroit riots.

How remarkable is it that this year we’ve had two wildly different, wildly enjoyable movie musicals (the other one being, of course, Hairspray)? Across the Universe certainly isn’t for every taste, but musical lovers – and you know who you are – will eat it up.

And to all those Beatles purists out there who can’t stomach the notion of actors (and Joe Cocker and Bono and Eddie Izzard) covering Beatles songs, I have this to say: I was introduced to the Beatles through a terrible movie, and made my way eventually to the lads from Liverpool. Across the Universe, which is a whole lot better, more intelligent and artistically alive, will lead a whole new generation to discover for themselves why the Beatles are so extraordinary and so phenomenally timeless.

Finally, “Let It Be” is sung, primarily, by Carol Woods, a veteran stage performer who just happens to be the best thing in Blues in the Night, the hit musical revue now at San Francisco’s Post Street Theatre. She’s the best thing in the show, and you shouldn’t miss her.

There are more clips and sound bytes at the official site here.

One of the funniest evenings I’ve ever spent in a theater was at the Cable Car Theatre in San Francisco for Eddie Izzard’s Dress to Kill (which was later filed at the bigger theater next door, which is now Ruby Skye nightclub).

Since then, Izzard has claimed his place as the world’s funniest men both in his own comedy specials and in movies (some serious). He even won raves on the legit stage with A Day in the Death of Joe Egg. His current gig is on the FX TV series “The Riches.”

Well, Bay Area audiences are lucky because Izzard is coming back to San Francisco to workshop his new show — but here’s the thing: there are only two performances. Izzards will perform at 8 p.m. Sunday, Aug. 5 and Monday, Aug. 6 at the Marines Memorial Theatre, 609 Sutter St., San Francisco. Tickets are $55. Call (415) 771-6900 or visit www.ticketmaster.com. Maximum of four tickets per person.

Get ’em while they’re hot.

Here’s a little taste of Eddie doing what he does (and as for how he dresses, he calls the look “action transvestite”):