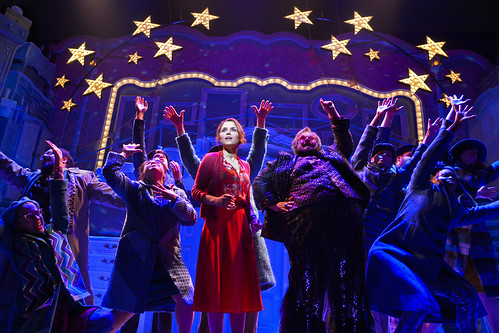 Samantha Barks is Amélie with the cast of Amélie, A New Musical, a world premiere based on the French film of the same name. Below: Barks’ Amélie inches ever nearer to a romance with Nino, played by Adam Chanler-Berat. Photos courtesy of kevinberne.com


In this age of illusory connection, a story of isolation told through music seems more necessary than ever. Connection with the world and people in it is a central theme of Amélie, the whimsical 2001 film, and it’s even more pronounced in the world-premiere musical version of the story now at Berkeley Repertory Theatre’s Roda Theatre.

The whimsy has been turned down (not altogether), but the charm and romance have increased in this tuneful adaptation with a book by playwright Craig Lucas and a delightful score by Daniel Messé (of the band Hem) and lyrics by Messé and Nathan Tysen. Told in a fleet, occasionally bumpy 100 minutes, this Amélie boasts an appealing ensemble under the direction of Pam MacKinnon, making her musical directorial debut, and romantic leads who leaven the charm with the pulse of real life.

After a rocky opening number that describes how we’re all leaving trails of breadcrumbs for others to follow all the while tracking the flight of a fly, the show kicks into gear with the story of a bright, spirited little girl named Amélie (Savvy Crawford in a dynamic performance), whose distant, over-cautious parents (Alison Cimmet and John Hickok) mistake her joie de vivre and lively heartbeat as illness. So they decide to minimize her connection with the world by home schooling her.

This isolation has a debilitating effect no the child that will affect her as an adult, but it does allow her to bond with an unlikely pet – a goldfish named Fluffy – and inspires a number that provides the first indication that Amélie will march to its own musical beat. The silly puppetry and vivacious choreography (by Sam Pinkleton) strike just the right notes of comedy and whimsy, even in the face of sudden tragedy. 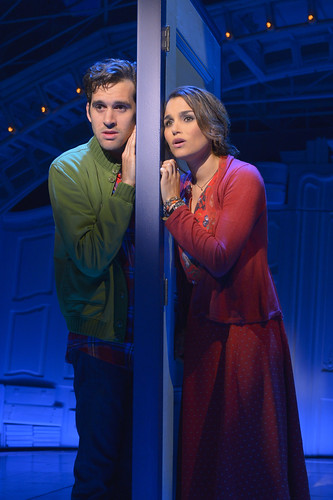 When Amélie grows up and becomes the wonderful British actor Samantha Barks, we see her as an intensely shy young woman show somehow found the wherewithal to move away from home and start a life for herself in the Montmartre district of Paris, where she’s a waitress in the Café des 2 Moulins.

Of the assorted characters in Amélie’s life, the one that makes the biggest impression is the Man of Glass, an elderly artist named Dufayel (Tony Sheldon) show studio Amélie can spy on from her apartment (she has been an inveterate spier and skulker since childhood). Each year, Dufayel, whose brittle bones mean everything around him must be padded, copies the same Renoir painting and gets everything right except the woman in the center who is looking at the artist.

Dufayel becomes a sort of Jiminy Cricket character in Amélie’s life as she begins making broader overtures in the world, meddling in people’s lives in the name of anonymous good deeds.

Partly inspired by the death of Princess Diana, Amélie begins following various breadcrumb trails and slowly finds a place for herself in the world, which includes a hesitant romance with an offbeat young man named Nino (the wonderful Adam Chanler-Berat), who compiles people’s rejected photo booth photos.

Amélie is the kind of musical that has the audacity not only to care about the beating of the human heart but to depict that beating with hearts and flashes of light. There’s a little sappiness around the edges here, but the sweetness is earned and intercut with enough humor and theatricality to keep it grounded.

The score by Messé and Tysen provides abundant pleasure, although a strange comic number that spins Elton John’s performance of “Candle in the Wind” at Diana’s funeral into a sort of gospel nightmare for Amélie begins in good humor and verges toward the offensive.

One of the stand-out numbers is performed by three of Amélie’s chums at the café – Carla Duren as Gina, Maria-Christina Oliveras as Suzanne and Alyse Alan Louis as Georgette – as they make sure that Nino’s intentions toward their friend are honorable.

One problem with the show is that you really need to have seen the movie to fully get it. Lyrics and plot points go by in a hurry, and without any familiarity, it’s kind of a blur, especially when we’re expected to know the finer points of Zeno’s dichotomy paradox, which is explained in a number that involves projections and diagrams but is still confusing. It has something to do with never getting anywhere because you have to get halfway first, and it must reflect Amélie’s difficulty breaking out of her constrained world. But it definitely adds to the confusion.

The central romance, however charmingly portrayed, also comes across as contrived, especially when the lovers’ ultimate connection keeps getting delayed and avoided to the point of wanting to call the whole thing off. By the time they get to their tender duet it’s not quite clear why they should be together other than its having been decreed by the script and the strictures of romantic comedy.

Amélie falls somewhere between tradition and innovation, folk and pop, delightful and frustrating. As new musicals go, it’s got the kind of vibrant, heartfelt spirit that Amélie’s parents would mistake for a disorder, but it’s a lovely show that, with more creative tinkering, should go on to have a long, charming life.

[bonus interviews]
I interviewed much of the creative team behind Amélie, A New Musical for a story in the San Francisco Chronicle. Read the story here.