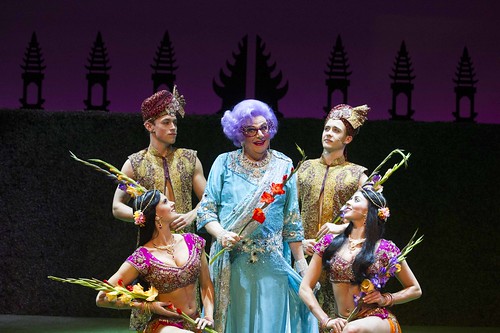 The grand Dame Edna (aka Barry Humphries, center) is back in San Francisco for what she’s calling a final bow in Dame Edna’s Glorious Goodbye: The Farewell Tour at SHN’s Orpheum Theatre through March 22. Photos courtesy of SHN


Tremble those gladdies, possums. Our dear Dame Edna is departing. She’s not shaking off this mortal coil (for her that somehow seems tacky), but she is saying a final goodbye. Sort of. Dame Edna’s Glorious Goodbye: The Farewell Tour is playing SHN’s Orpheum Theatre through Sunday, Feb. 22, and while it feels like comic business as usual for Australia’s greatest import since Vegemite, there is something final-feeling about this farewell.

The inspired creation of comedian Barry Humphries, Dame Edna is a gigastar whose celebrity seemingly knows no bounds. Humphries and his bespectacled alter-ego may be 81 (Edna says she’s approaching 60 “from the wrong direction”), but they’re still pretty light in their high heels. To call Glorious Goodbye a new show is being generous. If you’ve seen any of the Dame’s shows here in the last 17 years, you’ve pretty much seen/heard everything here – and that’s just fine. Consider this a victory lap for one of the great stage comedians. If Edna insults the alarmingly boring attire of her audience once, she does it a dozen times. She picks out some friendly (and poorly dressed, naturally) folks in the audience – Sally, Marja, Heather, Sandra and some old dopey senior citizen who thinks he’s on a cruise but likes the sparkle and movement – and keeps a conversation going with all of them, asking questions about their hum-drum lives and careers. In Act 2 she brings up two unlikely people – Kyle and Judy at Wednesday’s performance – and tells them they’re destined for intimacy. She then marries them and attempts to share the news with their families over a quaint contraption known as a hard-wired telephone. Of course neither Kyle nor Judy could remember any phone numbers because they’re all in their mobile phones. But Kyle, bless his heart, managed to remember his mother’s number only to get her voicemail. Undaunted by, as she put it, her show going down the toilet (“You’ll be able to tell your grandchildren!” she cried), Dame Edna left the world’s weirdest voicemail message, complete with audience participation. 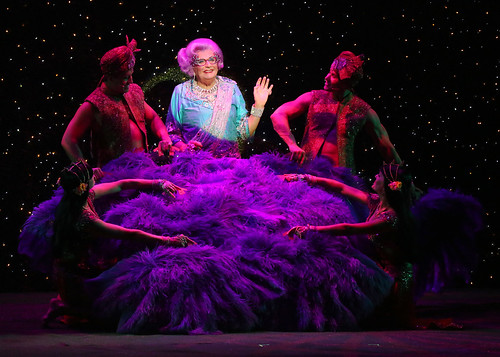 Humphries is simply a genius when it comes to audience participation. “What an attractive woman you are…compared to some of these others,” Edna says to someone sitting too close to the stage. When someone describes her bedspread as burgundy and brown, Edna’s lips do the Everage splits – upper goes north, lower goes south – and the eyes roll. “What color was it originally?” she wonders. He can handle every situation, cover every stumble and unearth every little insult and then smooth it with, “I mean that in a lovely, reverent way.”

Oh, sure. There’s a “show” wrapped around the audience interaction: some songs (with Jonathan Tessero on piano) and some dancers (Ralph Coppola, Brooke Pascoe, Eve Prideaux and Armando Yearwood Jr.), and of course there are well-worn video clips, but in essence, this is the same show we saw when Dame Edna truly broke into the U.S. theater scene in 1998 at the Theatre on the Square (now the San Francisco Playhouse). Playful and insulting, blissfully self-centered and oblivious to much of reality, Dame Edna has always been (and remains) a theatrical invention of the highest order.

Having now been on stage in a dress for 60 years, Humphries can be excused for wanting to step out of the mauve wig and rhinestone swirl and do other things (like rest). The most touching part of the new show, and its only dramatic difference from previous outings is Humphries’ arrival, sans dress and glittery aura, for a bittersweet curtain call. If previous farewell tours were a bit of a joke, this one feels more like the real thing. We’ve been treated to a generous helping of Dame Edna. We’re grateful for every barbed joke and eye roll. We’ll miss the grand Dame, but her legacy – filled with grinning possums and waving gladioli – lives on…at least until the next farewell tour. Creative schizophrenia is a common occurrence in show biz. You’ve got actors, writers and sometimes even directors donning different personalities in the name of storytelling and entertainment.

Nowhere was this fascinating split personality more evident than when interviewing comic genius Barry Humphries and his most famous creation, Dame Edna Everage.

The goal was to talk to creator and creation for a Theatre Bay Area magazine story (coming soon to http://www.theatrebayarea.org/mag/mag.jsp) in conjunction with the Dame’s new show coming to San Francisco’s Post Street Theatre (where it’s in previews now and officially opens Sunday, Nov. 23).

I was delighted by the assignment, having been a fan of both Edna and Humphries for years. I had interviewed both before and was excited to experience some of Humphries’ improv brilliance.

But let me tell you, interviewing a character is a strange experience (as it must be for Humphries to be interviewed in character – talk about concentration and chops!).

When I spoke to Humphries, he was doing a quick stopover in San Francisco and the previous night had appeared as Dame Edna at Macy’s Passport fashion fundraiser. In addition to kissing Mayor Gavin Newsom, Edna had auctioned herself off to the highest bidder (all in the name of charity, of course).

“I don’t know what will come of that,” Humphries mused.

We talked about Edna’s golden jubilee – 50 years since her creation – last year, and how this year’s return to San Francisco marks 10 years since Edna’s appearance at the Theatre on the Square (now the Post Street) sparked a late-career renaissance that led to a special Tony Award on Broadway.

Humphries is an erudite man, and conversation with him always takes surprising turns.

From Edna’s outrageous onstage high jinks, we skittered around to Humphries’ early days in comedy when he would play outrageous pranks on the public such as planting food in a garbage can near a busy restaurant, dressing as a street person and then wandering by, digging through the trash and eating what he “finds.” And then there was the trick with the canned soup and the air sick bag, but that’s a little gross.

“I’ve always thought of myself as Dadaist in the old European sense,” Humphries says. “I’ve always been very entertained and stimulated by that particular art movement. Through that I drifted into the theater. I really didn’t consciously choose acting. I did shows at university intended to outrage people.”

Humphries, it seemed, loved to shame the audience by enticing them to boo and heckle someone on stage, then reveal the person was blind and not really part of the show.

In later years, even as Edna, Humphries would still pull tricks such as having stunt people seated in a box in the theater, then when Edna begins hurling gladioli at the end of the show, they’d overreach to grab a flower and fall out of the box (they were outfitted with a safety harness, but the terrified audience didn’t know that).

“The whole audience was standing up, trying to assist and practically climbing up the stucco walls,” Humphries recalls. “Then Edna would say something like, `Isn’t that awful! Wouldn’t it be terrible if that happened every night!’ The audience was tricked into feeling terrible alarm and panic, but the stunt itself was very expensive – more than it cost to have four dancers in the show. But it was worth it.”

Humphries realizes the interview has hit the 30-minute mark, and politely signs off. The plan was to switch personae and spend the next 30 minutes as Dame Edna, but apparently he’s pooped and begs off the Edna interview.

A few weeks later, I call Humphries’ native Australia to talk with the Dame, and this is what I was greeted with: “Hello, darling Chad. You’ve caught me doing my toenails. I like to do them myself. I don’t like a strange woman fiddling with my extremities.”

Discussing how happy she is to be returning to San Francisco, Dame Edna says when in town, she often stays with society doyenne Denise Hale. “I don’t understand a word she says, but I adore that little Serbian minx. Hence the term `acerbic.’ Every aspect of San Fran I love.”

The grand Dame likes to work personal details of her interviewer into the conversation. She offers congratulations on a recent marriage and sends greetings to the new spouse. Then she offers an astrological observation: “You are such a typical Leo. It’s that growling thing you do. And you’re carnivorous.”

Last time she was in San Francisco, Edna revealed that she had been to local gay author Armistead Maupin’s wedding. “There was no sign of the bride. But something very excited happened. I caught his bouquet.”

Trying to get the conversation back on track proved impossible, but the ride was an awful lot of fun.