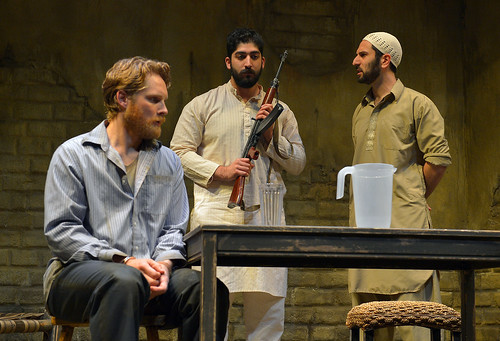 
Marin Theatre Company concludes its 49th season with a play that is timely for this election cycle to be sure, but because its focus is on the powerful religion known as money, it’s really timely all the time.

The Invisible Hand by Pulitzer Prize-winner Ayad Akhtar (Disgraced), is set in the Middle East, involves Muslim extremists and traffics in terrorism in the form of a potentially lucrative (and vengeful) kidnapping of American banker Nick Bright. But the most fascinating aspect of the drama is how incisively it cuts into what money (lots of it) does to human beings, whatever their cause or background. Akhtar takes a situation we think we know: an American employee of Citibank is kidnapped and held for $10 million ransom while he is working in Pakistan. The kidnappers, followers of a man named Imam Saleem, are attempting to bring some semblance of order back to their country after the U.S. has “raped and plundered” it and the government has failed its people utterly.

“This country has gone to hell because of people like my father wanting something better for themselves,” says a kidnapper whose family moved from Pakistan to the outskirts of London. It’s the same kidnapper who says he gave up a “soft life in the West” for something more meaningful, which, in this case, involves extorting money from the West to serve the people of Pakistan.

Nick, played by the always remarkable and relatable Craig Marker, was not the intended kidnap victim – the goal was someone higher up the corporate ladder – but he happens to be a catch because he’s a brilliant financier who knows how to turn money into more money through smart, not always scrupulous ways. That’s going to come in handy because the kidnappers have decided to put Nick to work. With access to a few million dollars, he is going to have 12 months to raise his own $10 million ransom by playing the market. The British-born kidnapper, Bashir (an excellent Pomme Koch), will serve as his chief assistant (and manage the laptop, which Nick isn’t allowed to touch). 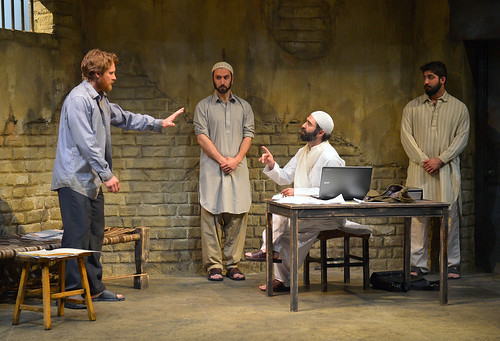 So from the confines of a mud and brick prison (set by Kat Conley), Nick and Bashir create their own little financial empire, with Nick providing a crash-course master class in manipulating the markets for his eager and able student.

What’s remarkable about this two-hour play, especially in its tighter first act, is how tense and exciting it can be two watch two guys moving money around on a laptop. Director Jasson Minadakis keeps the emotional stakes high and, with the compelling performances by Koch and Marker, turns what could be a dry class in international economics into a powerful dive into the corruptive and addictive nature of money.

We see Nick warn Bashir that making money can be intoxicating and that he needs to pull himself away from that rush. We also see Bashir ignore that advice. We also see that no matter how well intentioned or righteous a cause or a person might be, money and the power it brings can trump spirituality, morals and intelligence. Even leader Imam Saleem (a charismatic, enigmatic Barzin Akhavan) cannot remain immune from its corrosive power.

The second act, filled with shorter, choppier scenes, isn’t as effective as the first, but as things change and grow more desperate, the stage, ironically, becomes more beautiful as the lighting by York Kennedy effectively conveys stark loneliness and isolation through some stunning, almost painterly images.

Akhtar’s ending is less than satisfying if only because what has come before has been such an intelligently and dramatically wrought tangle of politics, finance and personal drama. The end comes too soon and lets the political take over, when that has been the least interesting aspect of the play.