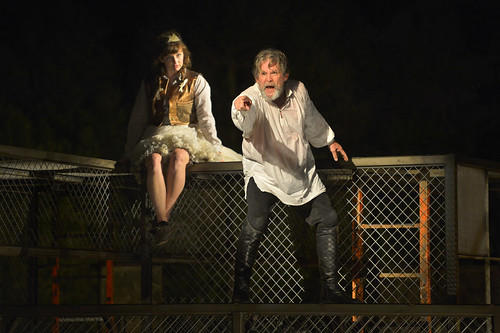 Kjerstine Rose Anderson is The Fool and Anthony Heald is Lear in California Shakespeare Theater’s season-ending production of King Lear directed by Amanda Dehnert. Below: Heald rages as Lear. Photos by Kevin Berne


When California Shakespeare Theater ended the 2007 season with a heavy, industrial-looking King Lear, opening night was a cold one in the Bruns Amphitheater (read my review here). Eight years later, Cal Shakes once again ends the season with another heavy, industrial-looking Lear, but opening night was one of the rare ones when you could have worn short sleeves throughout (most of) the 2 1/2-hour tragedy. There’s just something delicious about a warm, late summer night for watching the unraveling of the world.

More than any other Lear I’ve seen, this one feels apocalyptic. Perhaps I’ve been watching too many zombie shows on TV, but the play felt like the perfect recipe for end times: take a whole lot of hubris (and the ego, power, lust, greed and general wretchedness that comes with it), throw in the decay of actual madness to blur all the lines and then watch the cracks in the foundations followed by nihilistic chaos and the abundant flow of blood. If that’s not end times, what is?

At the top of the show, director Amanda Dehnert tips her psychological hand by having Kjerstine Rose Anderson sweetly sing a song (borrowed from Twelfth Night) that tells us about a man whose youngest daughter was “wise but he called her his fool.” Anderson will go on to play Cordelia, Lear’s youngest daughter, the one who is banished when she refuses to kiss his royal ass when asked to do so in exchange for a third of the kingdom, and then she will reappear as the Fool. In this production, the Fool will be a sort of nefarious Snuffaluffagus, a figment of Lear’s fevered imagination that gives him tough love, taunts him and fuels his encroaching madness. 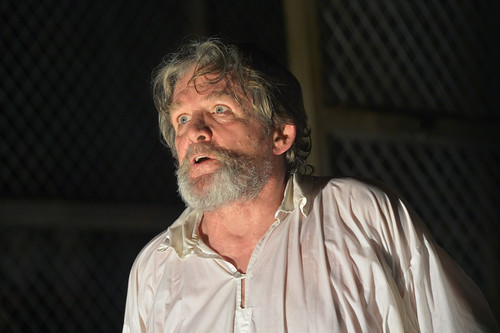 Anderson is terrific in both roles, and she has crackling good chemistry with the marvelous Anthony Heald as Lear. The most poignant moment of the entire production comes when Lear, navigating the fog of his mind, recognizes Cordelia, home from her banishment to care for him.

Dehnert allows Heald to rage memorably from high atop the moving metal-and-glass boxes that comprise Daniel Ostling’s set. Stagehands connect, break apart, reconfigure and spin the boxes, and during Lear’s stormy night (mentally and literally), he finds himself high atop the boxes screaming at the sky and the hills of the Siesta Valley. It’s a beautiful, powerful image.

Another striking visual comes in the torture of Gloucester (Charles Shaw Robinson, whose clarity of language and thought make you wish he were in every Shakespeare play) by Regan (El Beh) and her husband, Cornwall (Craig Marker). First they strap him into a chainlink enclosure, electrify the metal and force him against it. Then, the box spins, and through shadows on the glass, we see them gouging out his eye.

The lighting of the play, by Christopher Akerlind, is distinct, with many large lights (like you used to see on movie soundstages) on stage and moved around to highlight different scenes. Depending on where you’re sitting, this can be like driving into the sunlight, but it also creates a stark landscape on stage and helps isolate action in a large space.

Along with Heald, Andreson and Robinson, the strength of this production comes from Aldo Billingslea as Kent, who even manages to dignify the silly get-up (complete with red mohawk) he wears when the banished Kent returns in disguise and from Dan Clegg as Edmund the cartoonish bastard of a bad guy who seizes on the moment of royal upheaval to destroy his own family and shred the country even more. Clegg takes such delight in Edmund’s dirty deeds he might as well be twirling his mustache, but he’s fun, even if his dirty deeds seem more cartoonish than evil.

Director Dehnert leans too heavily on comic relief from Patrick Alparone’s Malvolio-ish Oswald, footman to Goneril, and his death toward play’s end (though he’s perhaps playing a different soldier character, I wasn’t quite sure) elicits laughs that feel out of place in view of what’s to come.

As Cinderella’s stepsisters, er, sorry, Lear’s older daughters, Beh as Regan and Arwen Anderson as Goneril are fire and ice respectively and not much more. They come across as more cartoonish than human, and their deaths don’t register much more than the inevitable erasing of cartoon baddies.

There’s unevenness in tone to this Lear, but that doesn’t necessarily feel out of place when it seems everything is crumbling. While Heald’s Lear is center stage, there’s a pounding pulse to the production and you feel the real cost of our idiocy when it comes to the little things – like running the world, navigating family and dealing with other human beings.