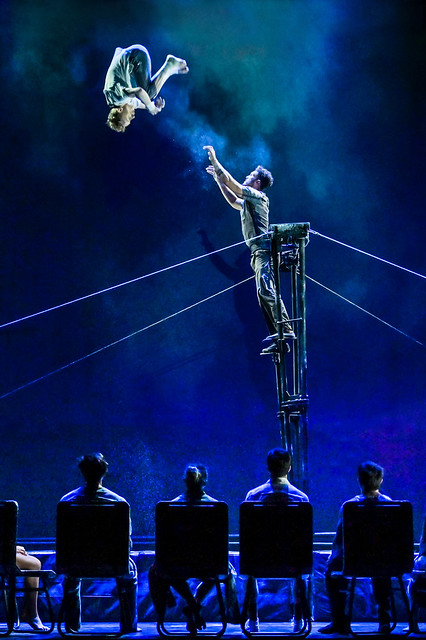 ABOVE: Andrew Sumner and Beto Freitas in Passengers , from The 7 Fingers, at American Conservatory Theater’s newly christened Toni Rembe Theater, through Oct. 9. BELOW: Santiago Rivera (center) and the ensemble. Photo credit: Kevin Berne


Going along for the ride in Passengers, the season opener for American Conservatory Theater, is one of the most thrilling experiences of the year.

This shouldn’t be surprising given that the show, a glorious blend of dance, theater and circus, comes from the ever-inspiring troupe The 7 Fingers and is directed ,written and choreographed by one of that group’s founders, Shana Carroll.

For the few weeks while Passengers is running on the stage of ACT’s newly re-christened Toni Rembe Theater (named for an extraordinary patron of the Bay Area arts), we have the great honor of having two 7 Fingers shows in town. The other is the long-running Dear San Francisco at Club Fugazi. And what these two shows have in common is the marvelous, entertaining and often thrilling showcase of the human body in motion. There is poetry and drama and humor and sexiness in that movement, and a whole lot more. There are circus acts you may recognize, but there’s always a theatrical spin, a novel approach and/or a delicious charge to the choreography that gives it all a unique charm.

Passengers is all about train travel. In the opening moments, the troupe of nine begins breathing together as if in a meditation class. Then those breaths turn into the rhythmic sound of a train rolling down the tracks, and there’s no looking back. 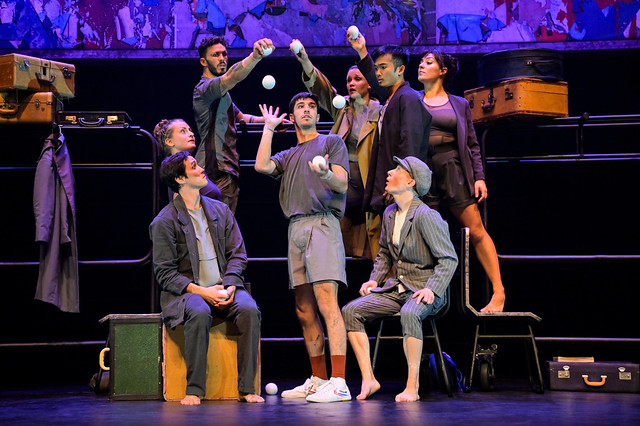 We are in stations, on bridges, in tunnels, inside the passenger cars exploring relationships among lovers, friends and strangers. The (mostly) pre-recorded musical score by Colin Gagné and the stunning visual designs by Johnny Ranger on Ana Cappelluto’s set conjure cinematic impressions of travel, with even the shadows of Éric Champoux’s lighting design adding to the beauty of the performances.

Once this whole enterprise gets moving, there is no let-up in the onslaught of gorgeous stage pictures. Just the movement and the detail in Carroll’s choreography is enough to keep your eyes finding fascinating places to land. But then there are the acts themselves, performed with such panache and gobsmacking skill. You’ve seen people juggle, walk the tightrope and swing on a trapeze before. But never quite like this.

Gravity is defied on ribbons and poles, and the finale, a sort of trapeze act that only involves human bodies and no actual trapeze, is filled with such power and grace that you may forget to breathe.

Rarely do you experience such high art that provides such thorough entertainment. There’s no pretension here – just the aim of creating something beautiful and amazing and even occasionally emotional. There’s spoken word, some live singing and some live ukulele playing. It doesn’t have the cold machine feel of some other modern circuses – this is warm and human and exciting.

At 100 minutes, Passengers flies by, even though the show never feels rushed. It’s a testament to Carroll and The 7 Fingers that this is one journey you just don’t want to end.