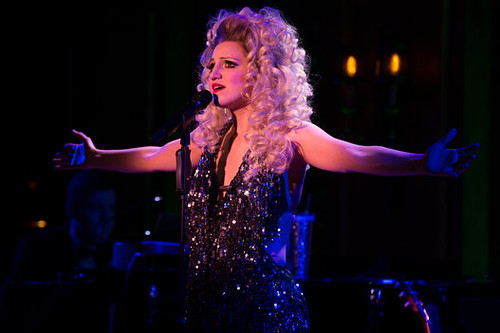 Annaleigh Ashford, a Tony Award winner for You Can’t Take It with You, closed out the season for Bay Area Cabaret with a sterling concert at the Venetian Room in the Fairmont Hotel.


Anyone who laments the lack of spectacular new Broadway stars need look no further than Annaleigh Ashford, a bona fide star if ever there was one. A Tony Award-winner for You Can’t Take It with You and former star of Wicked, Kinky Boots and, most recently, Sunday in the Park with George opposite Jake Gyllenhaal, Ashford is smart, charismatic and so loaded with talent it’s almost an embarrassment of riches.

Ashford’s act (Still) Lost in the Stars was the season finale for the Bay Area Cabaret season, and if you like fireworks with your finales, you would have loved this show.

It’s not everyone who can deliver within the same sharp cabaret show a 10-minute Donna Summer medley (complete with original rhyming text about the scene in Studio 54), make jokes about golden showers and yeast infections and deliver the most eloquent moving take on Stephen Sondheim’s “Children and Art” (from Sunday in the Park) imaginable. Ashford is that kind of performer – sincere, silly, elegant, buffoonish – but above all, she has a spectacular voice with which she can do just about anything and do it perfectly.

With a bouncy head of blonde curls and a sparkly ballroom dancing dress (she says she found it on eBay), she looked a bit like a feral Tammy Wynette, which suited the comedy (doing death-drop splits during the disco bit) and the drama (“Love Hurts”) equally well. Her three-piece band, headed by music director/arranger Will Van Dyke, skillfully navigated her changes in tone and ably handed everything from wacky disco to ukulele-inspired reinvention.

Not content to simply reinterpret pop songs (“Crazy” – Gnarls Barkley not Patsy Cline) or standards (“Come Rain or Come Shine” in the style of Israel Kamakawiwoʻole’s “Over the Rainbow”), Ashford also likes to play with her audience. She pulled up a game fellow during her “Broadway medley madness” segment in which she had the volunteer help the audience match the songs with the shows as she sang a tune from each of her Broadway gigs. Later in the show, she had volunteers cue the audience for sing-along/callback moments in take on Alanis Morissette’s “One Hand in My Pocket.”

That’s all very entertaining, but it’s when Ashford really connects with a song, as she does on “Children Will Listen” or on the passionate show-closing take on Jacques Brel’s “If We Only Have Love” that she shines brightest. And that’s not a normal “bright” – that’s a blinding, Ashford-level bright. Star bright.

Click here for more information about Bay Area Cabaret. The new season will be announced soon.