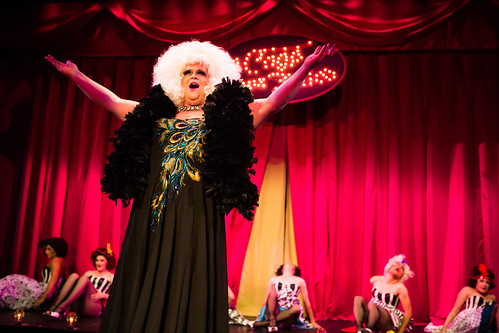 
Let us all take a moment to praise the national treasure that is Jerry Herman, the musical theater maestro behind three massive hits: Hello, Dolly!, Mame and La Cage aux Folles. It’s an opportune time to toast Mr. Herman: his Dolly is back on Broadway in a ravishing production starring the divine (and Tony-winning) Bette Midler, and closer to home, San Francisco Playhouse just opened a sweet and funny production of La Cage.

I feel like Herman only occasionally gets his due as a masterful Broadway composer – he writes music and lyrics – because he tends toward the feel-good, belt-your-heart-out kind of show tune that helped define Broadway as we know it. For certain tastemakers, that is sometimes just too, too showtune-y (if there can be such a thing). Herman’s a heart-on-your-sleeve kind of writer, and that’s what has made him an audience favorite for five decades. I saw Dolly on Broadway, and though Midler is dazzling example of human pyrotechnics in action, the production itself, and especially the score, produces endless delight and honest-to-goodness, palapble joy. Anyone who can make that happen for hundreds of people at a time is heroic.

La Cage, which debuted in 1983, was remarkably ahead of its time for its warm-hearted, comic take on a middle-age gay couple, their son and their St. Tropez drag club. There’s an arch-conservative villain who wants to run the gays out of the country and protect family values who should seem dated but, sadly, does not. The show was the last big hit for Herman, who is 86, and it remains delightful. The ever-reliable Harvey Fierstein, adapting a play by Jean Poiret, creates a solid structure with the book. He delivers a pleasing blend of nightclub/cabaret performance, farce and sweet family drama, which includes an especially poignant look at two older gay men in a long-term relationship before gay marriage was actually a thing.

With La Cage, Herman crafted an outright gay anthem that is still spine-tingling. When Zaza, the drag performer, stands center stage and sings “I Am What I Am,” it’s a profoundly defiant, entertaining, heart-swelling moment – a true high point in all of American musical theater. He also added several standards to his already packed songbook in the slightly melancholy love song “Song on the Sand” and the rousing “The Best of Times.” 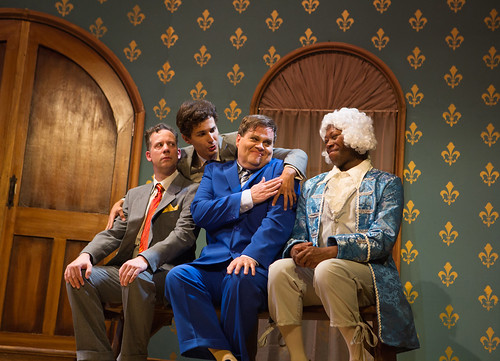 There’s true greatness in this score, but I’ve always felt like it’s really only 2/3 of a great score. Act 2 feels somewhat incomplete. Though “Best of Times” is a terrific song, it’s repetitious and doesn’t reach the peak of the Act 1 closer, “I Am What I Am.” Instead, the farcical plot kicks in and the bad guy has to get his comeuppance in the nightclub finale. That’s fun, but it doesn’t quite feel like the ending of the story, which is really about the central family: Georges, the nightclub owner and emcee; Albin, the performer who inhabits the drag persona Zaza; and Jean-Michel, the son they’ve raised who has met the girl of his dreams.

The sense of incompleteness in no way hampers enjoyment of the show, but in the SF Playhouse production directed by Bill English, the performances by the actors in that central family trio are so solid and sweet, you really feel the need to re-focus on them. Ryan Drummond is Georges, and though he plays, forgive the expression, straight man to the more expressive Albin/Zaza, his comic timing is superb, and his voice is even better. I’ve seen some Albin/Zaza performers who were so grandly flamboyant you wonder how these two men ever found enough common ground to stay together for 20 years, but John Treacy Egan manages the marvelous trick of taking the character over the top and never losing his deep connection to the husband and son he loves so dearly. Egan is a robust comic and a gorgeous singer, and he looks positively radiant in some of the Zaza outfits designed by Abra Berman.

Nikita Burshteyn has a tricky role as Jean-Michel, the son who wants his too-gay parent to disappear when his conservative potential in-laws come for a visit. You have to like Jean-Michel and forgive his outright cruelty to Albin, which is no small thing. He’s young, he’s in love, he thinks he’s guaranteeing his future by denying his past. But he’s an idiot, and Burshteyn plays him with sincerity, and (spoiler alert) he eventually comes to his senses.

It’s all good for comic set-up and an affecting song called “Look Over There,” which, strangely, is sung by Georges to Jean-Michel about Albin, who is only a few feet away yet cannot seem to hear the ballad that is singing his praises.

Part of the fun of La Cage is the nightclub setting, and set designer Jacquelyn Scott delivers an immersive club that extends a runway into the audience so we can get up close and personal with Les Cagelles, the club’s resident chorines (some men in drag, some women in the same kind of drag). There’s some sort-of dancing, but it’s more of the comic variety like you might see in a “You Gotta Get a Gimmick” number from Gypsy, and the personae of the ladies – Hanna the whip woman, Phaedra the enigmatic – come through in broad, entertaining strokes. Lee Ann Payne deserves special mention as the larger-than-life restaurateur Jacqueline, who memorably joins in with Zaza on “The Best of Times” and has a grand time kicking the farcical finale into gear.

Musical Director Dave Dobrusky and a six-piece band keep the sound bright, with lots of accordion (it is France, after all), guitar and brass. At 2 1/2 hours, La Cage can feel a little long in parts, but Dobrusky and director English (with the help of the turntable set), keep things moving, which only helps the comedy.

Perhaps in coming seasons, Egan will help keep the Herman legacy alive by returning to play those other remarkable leading ladies, Dolly and Mame. Our troubled and troubling world could always use more Jerry Herman show tunes.