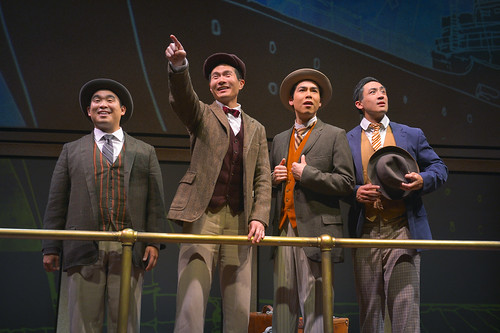 The four immigrants of The Four Immigrants: An American Musical Manga are (from left) Frank (Phil Wong), Henry (James Seol), Fred (Sean Fenton) and Charlie (Hansel Tan). Min Kahng’s musical has its world premiere in a TheatreWorks Silicon Valley production at the Lucie Stern Theatre in Palo Alto. Below: The four women of Four Immigrants are (from left, behind the gentlemen) Rinabeth Apostol, Kerry Keiko Carnahan, Lindsay Hirata and Catherine Gloria. Photos by Kevin Berne


Think about how often you’ve seen the Asian-American experience represented in a piece of musical theater. Perhaps Flower Drum Song comes to mind or a sliver of Miss Saigon. A more serious recent work is Allegiance about the World War II Japanese internment camps. And now we have TheatreWorks of Silicon Valley’s world premiere, The Four Immigrants: An American Musical Manga with book, music and lyrics by the enormously talented Bay Area writer Min Kahng.

A product of TheatreWorks’ 2016 New Works Initiative, the show has leapt from the development program to the main stage, which in this case, is the Lucie Stern Theatre in Palo Alto. It’s easy to see why this delightful show took the fast track to full production. 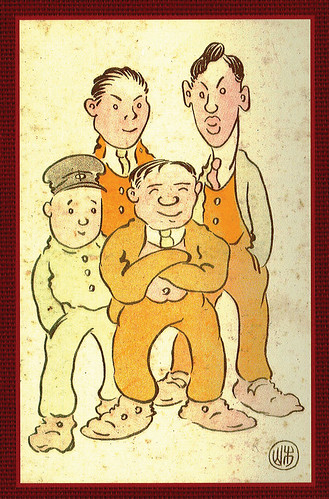 (at right) Panel from the cover of Henry Yoshitaka Kiyama’s Manga Yonin Shosei, translated as The Four Immigrants Manga: A Japanese Experience in San Francisco 1904-1924 by Frederik L. Schodt (original Japanese-language edition, 1931) on which the musical is based, published by Stone Bridge Press, Berkeley, CA

Here is a story we seldom get to hear in any form of pop culture, let alone musical theater: four Japanese men leave their homeland to find better, brighter lives in the promise of America at the turn of the 20th century. They meet on the boat, form a friendship and land in San Francisco in 1904 a solid quartet ready to face tragedy and triumph (or so they think). What’s more, this story is based on Henry Yoshitaka Kiyama’s 1931 The Four Immigrants Manga, considered the first-ever comic book made up of original material – a predecessor to the graphic novel if you will.

The resulting production, directed by Leslie Martinson, captures the exuberance of a comic with a sort of vaudevillian/ragtime-y feel coupled with a serious, often harsh story about obstacles, violence and sheer stupidity faced by immigrants to the U.S., especially if they are not white. We’ve often seen the immigrant experience told from the European-East Coast perspective, so it’s especially interesting to get the Asian-West Coast perspective.

The boys start out young and hopeful in a deft opening number that establishes that they are really speaking Japanese to each other (they know very little English) and Charlie, Fred, Frank and Henry are their chosen American names. Even incarceration (for supposed medical reasons) on their arrival can’t dim their excitement. 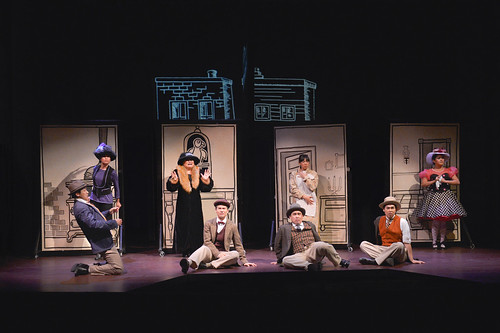 The personalities emerge fairly quickly. Charlie (Hansel Tan) is the chief optimist. In fact, his song, “Optimism,” is an absolute stand-out in an already charming and tuneful score. Fred (Sean Fenton) is practical and just wants some land to farm. Frank (Phil Wong) is the most timid of the group and the least forthcoming with his dream, which turns out to involve becoming the king of American footwear. And Henry (James Seol) is the artist who will eventually create the drawings that will eventually become the comic book that will eventually become the musical.

The bizarre new world of San Francisco and the Barbary Coast is represented by a colorful cast of characters, most played by a fabulous quartet of women: Rinabeth Apostol, Kerry K. Carnahan, Catharine Gloria and Lindsay Hirata. It’s also worth nothing that in the early years of the story (which covers 20 years), they are playing rather cartoonish denizens of San Francisco, from the matrons hiring the young men as house servants to police to women of the night to gambling hall gals. But as the story becomes more involved, each of the women becomes a distinct character, most notably Apostol as the elder from the church, Hirata as the independent-minded Hana and Carnahan as Kimiko, a mail-order bride with a singular mind of her own.

The look and feel of the show conveys the feel of cartoon panels in Andrew Boyce’s fluidly moving set, and though there were apparently opening-night computer problems marring Katherine Freer’s projection design, but what we saw was vivid and offered an efficient sense of place and color. The set and projections, with effective lighting by Steven B. Mannshardt, also create a sense of Henry’s drawings as the go from being simply sketchbook doodles to important documentation and holders of memories.

Kahng’s score is immediately likable and mostly cheerful. His version of vaudeville is much brighter than, say, Kander and Ebb’s (Cabaret, Chicago), but the music (conducted by William Liberatore and played by a six-piece band) still manages to conjure joy (the aforementioned “Optimism”) and emotion (the beautiful “Furusato,” which conveys a deep connection to one’s roots and home).

The special spark of the evening comes from the ebullient choreography by Dottie Lester-White, who knows just how far to push her performers to make them seem joyful and vivacious but never silly (unless expressly meant to be).

Like Henry’s drawings, the vision of Japanese immigrants here is a far cry from the stereotypes that have been around for far too long. These are multifaceted human beings with hopes, dreams, roots and complications, all of which comes through in their expressive songs. These men – and eventually the women and children in their lives – are good friends to one another, and when racism and horrific laws (non-whites can serve in the armed forces but can’t be citizens or own land) and even floods and earthquakes threaten to derail them, they rally and provide sustaining support.

This eight-member ensemble truly feels like an ensemble, each a major player with heart and personality (and talent) to spare.

Though hopeful in the face of reality, there can’t really be a happy ending here. The action concludes in 1924, but we know what’s coming with World War II and the grotesque treatment of Japanese-American citizens. There’s even foreshadowing here with mentions of General Tojo and the emergence of Japan as a world power. But this is a musical, a bright and beaming musical and that, and reality, though not ignored, feels so much more tolerable in song.