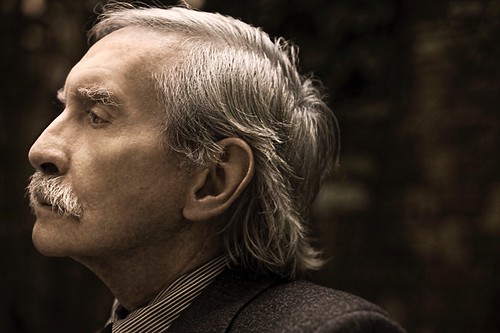 A towering giant has fallen. Edward Albee has died at 88.

A playwright who forged his own way and wielded his distinctive voice with lacerating skill, Albee helped define theater as we know and practice it today.

I sat down with Albee in 1997 when his Three Tall Women (one of three Albee plays to win the Pulitzer) was playing the Herbst Theatre. He was 69, and though he had a lot to say, he said it quietly, almost mumbling. When I played back the tape for transcription, there were great inaudible chunks, and I figured that was exactly as he wished it to be.

Our conversation covered a lot of ground, including his adoptive parents who raised him in affluence. “I obviously was not going to survive their environment or their hatreds,” he told me. “I wasn’t what they bought. I couldn’t tolerate their political fascism. If they’d been a wonderful family, I probably would have rebelled against everything that was good and turned into the monster that I rebelled against.”

Albee’s rebellion pushed him into the theater, where he triumphed with The Zoo Story and later with Who’s Afraid of Virginia Woolf?, Tiny Alice, A Delicate Balance and The Goat, or Who Is Sylvia?. Along the way he picked up the label “gay playwright,” and that wasn’t OK with him.

“I don’t think anybody’s identity should exist in being gay,” he said. “That’s not identity. That’s one of many identities. I belong to many minorities I’m male, I’m white, I’m educated, I earn a living, I can read, I’m creative and I’m gay. They’re all true. One of these is not any more demanding as a subject than any of the others, and I don’t find my identity in any of them. I find my identity in all of them.”

On the subject of writing, Albee said: “Communication is possible and people are capable of change. Any writer who keeps writing is nothing but an optimist. The most pessimistic writer I ever knew was Sam Beckett, but Sam kept on writing because there was a possibility of communication. No writer is a pessimist who keeps on writing.”

Albee said critics who liked his work were bright and those who didn’t were assholes. He said critics needed to tell the difference between “that which is useful and that which is merely decorative.” But the larger goal had to do with the audience: a person should leave the theater different from when they entered it. “That only happens when you allow it to,” he said. “People turn their backs on a lot of serious work because they don’t want that to happen to them.”

And, finally, we have some life instruction from the late, great Edward Albee.

People should pay more attention to how they’re living their lives, whether they’re living them fully, questioning their values. If not, they should start to think a little differently about their lives. The terrible thing is that people get to the end of their lives and realize they haven’t lived. Or they’re full of regret for things not done or things unchangeable, and that’s terrible. I don’t want people to be that way. I want everybody to live on the precipice. I want everybody to develop an awareness of immortality.