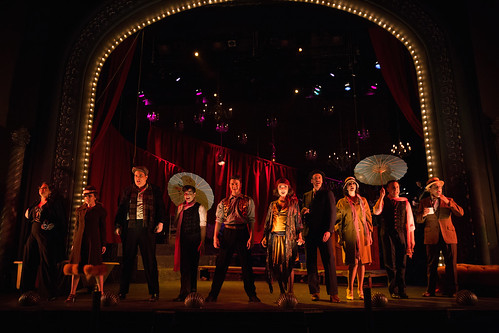 
San Francisco has known its share of wild parties, but the particular bit of revelry now happening at the Victoria Theatre under the auspices of Ray of Light Theatre is of particular interest. Once again, this enterprising company ignites the local musical theater scene with remarkable energy and talent, and their production of The Wild Party imbues a flawed show with undeniable passion and pizazz.

Lippa’s show boasts some real show-stopping moments, but there’s no character you really care about, and his score feels like Kander and Ebb’s Chicago and Cabaret spawned a love child with Stephen Sondheim’s Follies. There’s period pastiche with more contemporary pop that creates a glossy version of decadence that never really feels downright dirty or dangerous. Act One, in which lovers Queenie and Burrs throw a party in an effort to inject a little life into their stale relationship, is much livelier and more fun than Act Two, which zeroes in on the doomed love triangle between Queenie, Burrs and the enigmatic Black. There’s no place for the story to go except to its logical extreme, and without any surprise elements or characters we really care about, it’s all a big shrug. 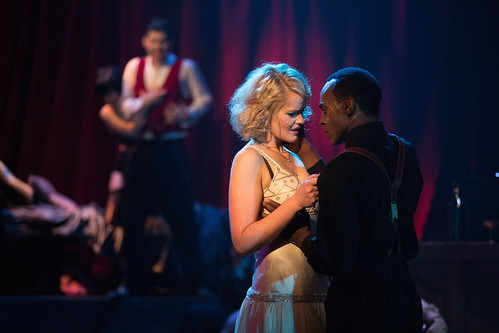 That said, director Jenn BeVard does everything she can to keep this party going. Her 14-member cast has the vivacity thing down. They attack this material like it was shrimp on the hors d’oeuvres table, enlivening the choreography by Alex Rodriguez and giving the score their all, which is considerable. Music Director David Aaron Brown fronts a wonderful sextet that’s big on the brass and makes you want to keep the party going even after it reaches its (predictably) tragic end.

The stage of the Victoria looks great thanks to set designer Erik LaDue, who eschews a realistic (or even impressionistic) New York apartment set in favor of a crumbling theater, with red velvet curtains akimbo and bar shelves full of bottles that look like they’re all about to shatter on the floor.

Leading lady Jocelyn Pickett as Queenie has a strong, gorgeous voice and uses it to great effect on “Raise the Roof” – one of the show’s two stand-out songs – and “Who Is This Man?” Paul Grant Hovannes as Burrs is equally adept at tackling Lippa’s score and creating the image of a passionate man and vaudeville clown by trade who is prone to violence, making him a truly scary clown. His “Let Me Drown” in Act Two isn’t a great song, but he turns into a thrilling number. Strong support comes from Alexandra Feifers as Kate, a party guest with designs on Burrs (and a nice stash of nose candy in her brassiere), and she gets the show’s other musical highlight, “The Life of the Party.” And RaMond Thomas radiates sexy allure as Black, the party guest who will end up in the bathtub with Queenie and in trouble with Burrs.

Kathryn Fox Hart as Madeline True has a great moment with “An Old-Fashioned Love Story,” and Daniel Barrington Rubio and Lizzie O’Hara have a lovely vaudevillian duet – he’s giant, she’s tiny – in the charming “Two of a Kind.”