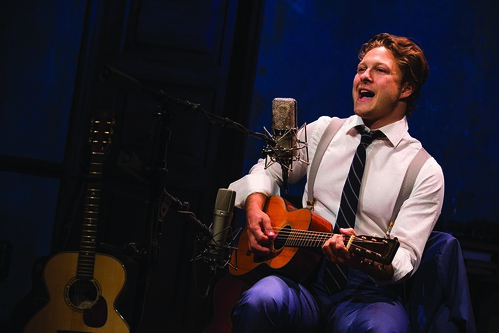 Benjamin Scheuer’s autobiographical solo musical, The Lion, has been a hit around the world and makes its San Francisco debut at ACT’s Strand Theater through May 1. Photos by Matthew Murphy


If Benjamin Scheuer were simply a musical act, I’d happily go see him in concert and buy his albums. his voice can go from sweet to gravelly, aggressive to tender, rollicking to romantic even within the space of a single song, and the same can be said for his guitar playing. He puts himself out there in his music, and in addition to being aurally pleasing, his music is also deeply satisfying.

But Scheuer is more than a concert act. He’s also a playwright and actor. So his version of a concert is the one-man autobiographical musical The Lion now at American Conservatory Theater’s Strand Theater. His combination of monologue and songs is irresistibly wonderful, and my only complaint about the show is that, at 70 minutes, it’s too short. At the end I felt greedy and wanted more, more, more. I’ll just have to wait for his new album, Songs from The Lion, to be released June 3.

I reviewed the production for the San Francisco Chronicle. Here’s an excerpt:

With a vocal range that starts with James Taylor, detours into Dave Matthews and occasionally diverges into Marcus Mumford (and perhaps some of the Sons), Scheuer performs Tin Pan Alley, blues, folk and rock convincingly.
Even more, his writing is as masterful as his singing and playing. Two songs late in the show, one in which he imagines his mother receiving a call from her late husband and another in which Scheuer writes a postcard to the dad he never got to make up with, deal with the push and pull of grief and healing in ways that simple dialogue could not.
“The Lion” comes across as an effortless evening of song and story — that’s its polished surface. But in reality, it’s a rare and nearly perfect piece of solo autobiographical musical theater — that’s its triumph. 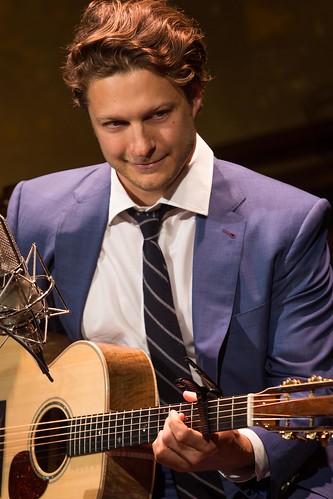 [bonus interview]
I talked to Benjamin Scheuer for a feature in the San Francisco Chronicle. Read the story here.

[bonus video]
Here’s the official music video for Scheuer’s “Weather the Storm,” a song from The Lion.