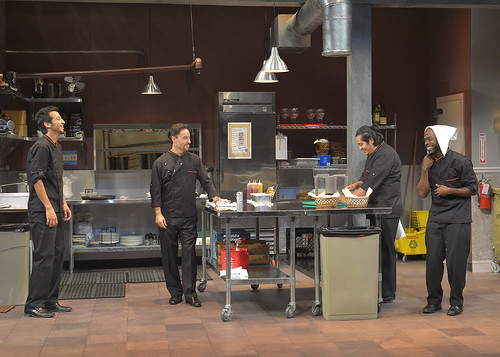 
Elizabeth Irwin’s My Mañana Comes cuts through any pretense and gets right to the heart of real life in these United States. In so much of the entertainment we consume (and, truth be told, in the lives we lead), the people Irwin writes about here are on the fringes, working diligently to make modern life run smoothly and efficiently but without much consideration from those whose lives their work benefits. In this case, the focus is on four bus boys in a busy Manhattan restaurant. Two are Mexican immigrants, one here for four years, the other just a few months. The other two are American born. One is African American and the other is born to Mexican immigrants but without much connection to his parents’ native culture (he says he thought he was Puerto Rican until was a teenager).

All four share the need for more money than they presently have – to send money home, to save up to bring family to New York, to pay for education, to support wife and child. And they all have to find ways to deal with the low-paying grunt work they are required to do on a daily basis and the lack of respect and/or dignity that can entail.

Hearing these voices on stage, experiencing the lives of these men is reason enough to see My Mañana Comes – the humanity, the empathy, the struggle that come through is powerful and, in many ways, universal. Any examined life, as they say, will yield great drama and complexity, and that’s certainly true here. These men are dealing with issues of race, economy, immigration, self-respect and ethics in ways that can have profound impact on their lives like where they sleep that night, how to avoid the police or how to save money when it costs so much to live in New York (especially when you’re eyeing a new pair of Nike sneakers). 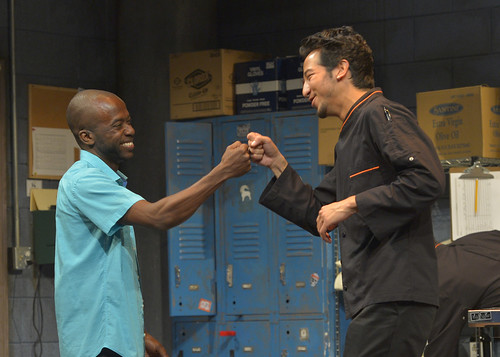 The four actors – Eric Avilés, Caleb Cabrera, Carlos Jose Gonzalez Morales and Shaun Patrick Tubbs – are the other reason to see this play. As realistic as the kitchen set is (by Sean Fanning), they bring even more realism to their portrayals of four very different men. Avilés’ Jorge is sort of the calm center of the group. He is radically frugal in an effort to save enough money to return to his family in Mexico and finish building their home. His deep commitment gives him a focused center around which the other guys bounce. Tubbs’ Patrick, the one black guy amid the Mexican and Mexican-American guys, is the crew leader, and when management attempts to screw the bus boys out of their salary pay, his ferocious energy is focused on galvanizing his coworkers and fighting back.

Cabrera’s Whalid is young and ambitious. Born and raised in Brooklyn, he sees this bus boy job as a stepping stone to something bigger and better, like being an EMT. And Morales’ Pepe, whose English is still a work in progress, is sort of the comic relief – lots of new guy and new immigrant jokes at his expense – but there’s also something compelling and sad about his desire to bring his brother to the U.S. and the pull he feels to spend money rather than save it.

There’s camaraderie and tension and fascinating dynamics within this quartet, and that’s when Irwin’s play and director Kirsten Brandt’s production are strongest. We mostly see the kitchen in off hours, before or after food service happens, but there’s a beautifully choreographed sequence involving the service of food (at this restaurant servers are apparently never in the kitchen, chefs are not part of the kitchen culture and bus boys prep the food and bring it to the tables), with the guys coming and going like a well-oiled machine. But the hyper-reality of the setting can also work against the production because it doesn’t feel quite real enough. There’s a lot of busy work involving the slicing of lemons and limes, and when one guy is doing inventory, he’s basically unboxing a few bottles of olive oil. For all the realism, this never feels like a functioning kitchen.

Brandt’s play has some great exchanges between the busy boys, and her dialogue often feels less like drama and more like documentary. But her dramatic structure invests a whole lot of the show’s 95 minutes in set-up. The actual conflict doesn’t occur until late in the play, and when it does, there’s real power to it. The lengthy set-up pays off, but in many ways it also feels like the story is just beginning.