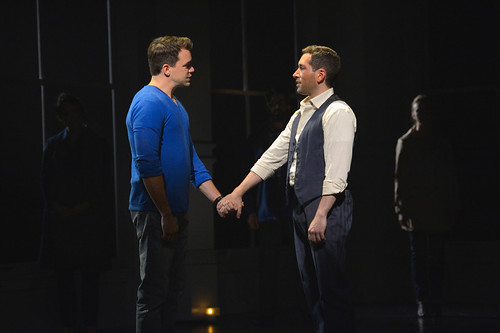 Brian (Ross Lekites, left) finally accepts Ben (Zachary Prince) into his life in the TheatreWorks world premiere of the musical Triangle at the Lucie Stern Theatre in Palo Alto. Photo by Kevin Berne


In the wake of my review of TheatreWorks’ world premiere musical Triangle someone tweeted a link to the review and suggested that the show could make it to Broadway. I have some thoughts about that. First of all, if Triangle opens on Broadway, godspeed and congratulations to all the talented people who made it and happy (or sad as the case may be) will be the audiences who get to enjoy its well-crafted pleasures. But I don’t think Triangle belongs on Broadway. This is an intimate chamber musical – cast of six – that takes love and grief and history seriously and deftly uses music to underscore its rich emotions. In other words, it’s too good for Broadway – at least the Broadway we knew before Fun Home and Hamilton made it safe for intelligence and intensity once again on the Great White Way.

Who knows if this trend continues, but if it does, maybe shows like Triangle will reach the larger audiences they deserve to, but if this musical continued through the world of regional theater or even ended up off Broadway, that would be OK. Audiences would have the pleasure of experiencing it in smaller houses where it feels personal and scaled just right – epic emotions but small-scale storytelling with the added twist of time travel.

I can imagine audiences experiencing Triangle in a stripped-down version at TheatreWorks New Works Festival three years ago and falling hard for it and feeling proprietary about it. That’s kind of how I feel about it now. I don’t want Broadway to ruin something with such integrity.

Here’s a bit of my review:

The show, a hit at TheatreWorks’ 2012 New Works Festival, aims to accomplish a complex and ambitious task while remaining heartfelt and intimate. Though there are still kinks to work out, “Triangle” is astonishingly successful.
The trick is flipping back and forth in time without making the show feel bifurcated and blending a contemporary pop sound with a more traditional chamber musical sound. Composer Curtis Moore and lyricist Thomas Mizer, who both crafted the book with Joshua Scher, have mostly figured out how to do it, with a huge assist from Meredith McDonough’s effectively streamlined direction.

FOR MORE INFORMATION
Triangle continues through Aug. 2 in a TheatreWorks production at the Lucie Stern Theatre, 1305 Middlefield Road, Palo Alto. Tickets are $19-$74. Call 650-463-1960 or visit www.theatreworks.org.